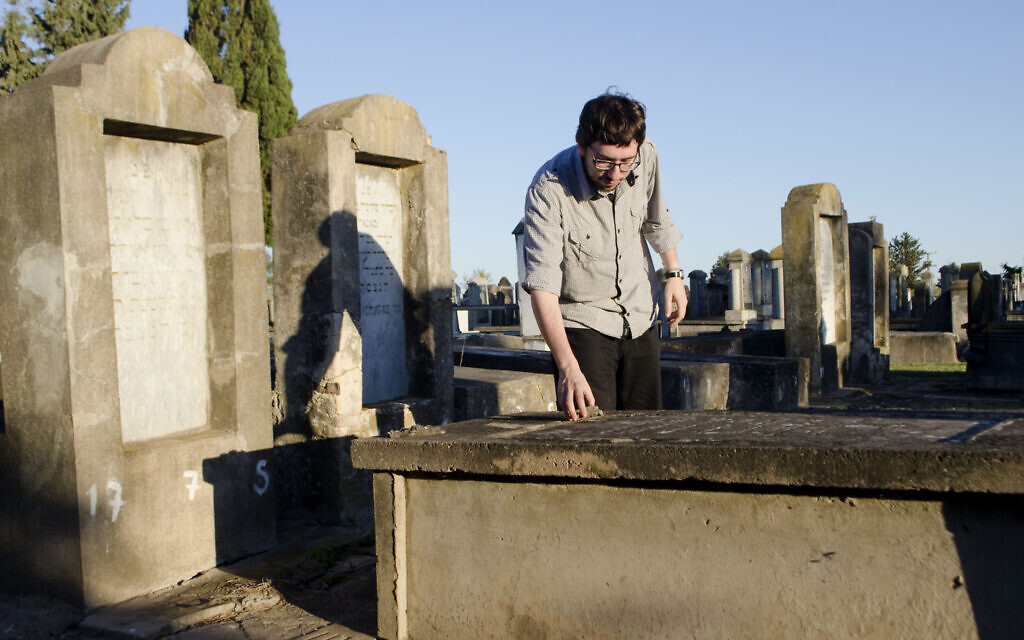 JTA — On June 9, 2009, Javier Sinay’s father sent him an email with the subject line, “Your great-grandfather.” The email was linked to a Spanish translation of an article written in 1947 by Mijel Hacohen Sinay.

“The First Mortal Victims in Moises Ville” detailed a series of murders that occurred in this village, Argentina’s first rural Jewish community, between 1889 and 1906. All of the victims were recent Jewish immigrants, murdered by traveling gauchos who took advantage of their vulnerability. .

“Reading this article raised many questions,” Sinay, an investigative journalist from Buenos Aires, explained in an interview with the Jewish Telegraphic Agency in New York during his recent book tour. “Why did my great-grandfather report murders committed half a century earlier? Who were the people murdered? And why?”

One question led to another, and as a result Sinay began his own investigation, an investigation that grew into something much bigger and deeper.

The result is “The Moises Ville Murders”, a book that goes beyond true crime to become a history of Jewish migration to Argentina, as well as a travelogue of Sinay’s visits to Moises Ville, retracing his own family roots. A surprise success in Argentina, the book had three printings and launched a national debate on collective memory in a society that often prefers to bury the past. It was published earlier this year in English by Restless Books.

The village of Moises Ville, where the murders took place, is located about 400 miles north of the Argentine capital Buenos Aires. For Argentine Jews, it is a mythical place, to which they attach feelings of nostalgia like those that American Jews feel for the Lower East Side of Manhattan. However, as Sinay points out, “its history is unique since Argentina has the only Jewish community that began as an agricultural community.”

Fleeing poverty and pogroms, hundreds of thousands of Jews left Tsarist Russia at the end of the 19th century. Munich philanthropist Baron Moritz von Hirsch founded the Jewish Colonization Association, which facilitated their resettlement in Latin America on the theory that Jews who lived in small shtetls would find it easier to become farmers in the New World than to resettle in urban areas. However, as the book’s publisher puts it, “Like their city’s prophetic namesake, these immigrants fled one form of persecution to encounter a different set of hardships: exploitative land prices, starvation, disease [and] Language barrier.”

The first inhabitants of Moises Ville were a group of families from Bessarabia and the region of Podolia in today’s Ukraine. The village will soon become the cultural center of Jewish life in Argentina. Among the founders were Sinay’s great-grandfather, Mijel Hacohen Sinay, who arrived in 1894, and Alberto Gerchunoff, who in 1910 would publish “Los Gauchos Judios” (“The Jewish Cowboys”), a collection of short stories set in a village inspired by Moises Ville. Gerchunoff’s book is considered the first Latin American literary piece focusing on Jewish immigration to the New World.

However, by the time the book was published, the majority of Jews had already settled in Buenos Aires, including Mijel Hacohen Sinay and Gerchunoff, whose father was one of those murdered in Moises Ville.

Javier Sinay, 42, was born and raised in Buenos Aires. When he first learned of the murders, he didn’t know much about Moises Ville or his family’s history.

Javier Sinay’s book on Moises Ville and his family’s history was a surprise hit in Argentina, where it went through three print runs. (Julian Voloj/JTA)

“I always knew I was Jewish, but I wasn’t raised in a Jewish environment,” said Sinay, who started working on the book when he was 28. “It was like an old call to learn more about my ancestors. I found myself a link in a chain.

This channel was not only linked to his Jewishness, but also to his love for journalism. “Before I started my research, I didn’t know that I came from a family of journalists, going back to my great-grandfather, the protagonist of my book.”

“He was barely 20 years old. Finding that out was just amazing,” Sinay said.

Sinay himself worked for the newspapers La Nación and Clarín and as editor of the Argentinian edition of Rolling Stone. He is currently an editor for REDACCION.com.ara news media about solutions journalism.

To read his great-grandfather’s work, however, Sinay had to overcome a language barrier. To learn Yiddish, he went to the Fundacion IWO, the South American counterpart of YIVO, the New York-based YIVO Institute for Jewish Research. “I couldn’t even read the Hebrew letters,” he says.

He was quickly able to read newspaper headlines and book titles in Yiddish, but despite his progress, “it’s not enough to translate entire articles by myself.” Sinay was introduced to Breitman’s Ana Powazek, known to her friends as “Jana”, the daughter of two Holocaust survivors from Poland, who would help with translations.

“I would go to the warehouse of Tzedek [a Buenos Aires Jewish charity] and look for old Yiddish books. If it looked like there might be something interesting for my research, I would buy the book and give it to Jana to translate. She would read for me in Yiddish, then translate into Spanish while I typed notes. For four years, they will meet twice a week.

Original copies of his great-grandfather’s diary had been stored in the building of the Jewish Federation of Argentina, AMIA, which was destroyed in a 1994 terrorist attack.

“The AMIA bombing is very traumatic for the entire Argentinian Jewish community, but almost made my research impossible. It underlines that it was also the destruction of a culture,” Sinay said.

Some newspapers survived and were part of an exhibit at the National Library of items rescued from the terrorist attack. However, after the exhibition, even these papers disappeared. Sinay has hired a private detective to find them, but so far nothing has been unearthed. “But I haven’t given up hope,” he said.

The culmination of his investigation was his trip to Moises Ville. “I think I was the first of the Sinays to come back after my family ended up in Buenos Aires,” he said.

Today, Moises Ville has just over 2,000 inhabitants, approximately 10% of whom are Jewish. Jewish sites include the Kadima Cultural Center, which contains a theater and library; the old Hebrew school, the first Jewish cemetery in Argentina and three synagogues. A particularly meaningful experience for Sinay was spending Shabbat in Moises Ville at one of the local synagogues.

“I had never been to the synagogue before. I celebrated my first Kabbalat Shabbat in Moises Ville. It was a fascinating experience. I was thinking about my ancestors and what kind of Jew I am. My upbringing has little in common with these immigrants, but I feel very connected to them,” he said.

“The Moises Ville Murders” brings to light a chapter in Argentina’s history that has been largely forgotten.

“There is a romanticized image of immigration, but the reality was brutal,” Sinay explained. Although he couldn’t find all the answers he was looking for, he thinks he understands why his great-grandfather wrote about the murders more than half a century after they took place.

“He wrote about the murders just after the Second World War, in a time of collective mourning. It was a catharsis remembering the dead, and while it wasn’t related to the Holocaust, it was part of the zeitgeist. He was talking about our history and our suffering. I don’t know if that’s true, but that’s a theory I have,” he said.

Connecting as a journalist with the work of his great-grandfather is also a tribute to the power of journalism, he said. “There’s a lot of chaos in journalism today, but it’s still possible to find good, meaningful stories that become our legacy.”

Reflecting on his own identity, he concluded, “I didn’t do a bar mitzvah, but maybe writing this book and claiming my Jewish identity through journalism was my bar mitzvah. And it’s something that I chose, not something that was imposed on me.