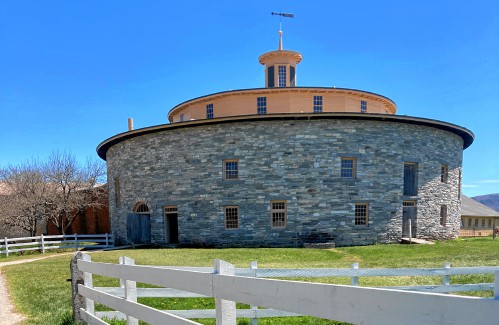 This past semester, my husband, Jim, and I took a fabulous Five College Learning in Retirement seminar on museums. Jim chose Hancock Shaker Village in Pittsfield, which we had visited at least twice before, but for the preparation of this article we decided another visit was necessary. (There are some nice background videos on their website).

How happy we are to have been there! May 11 was a perfect spring day. The drive from Amherst takes about 1.5 hours and we made sure to get there before 11am opening time. There is a cafe on site, but we packed lunch (cheaper and quicker) and were glad we had time to explore the beautiful grounds and buildings.

There weren’t many tourists yet, but a docent told us that in the height of summer they often get 1,000 visitors a day. We were glad to have arrived early.

Hancock Shaker Village was an active community of some 300 residents in its heyday from the 1780s to the 1960s, after which it was taken over by a private entity and turned into a museum, which is now open from April to December.

Find out about the history of the Shakers before you go: they were a very egalitarian group, governed by two elders and two elders; men and women lived and ate separately, but both contributed equally to the success of the community. Orphans and children who wished to join could do so; they learned a trade and were not forced to stay, although many did.

For example, the story of Polly Jane Reed, a member of the Mount Lebanon (New York) Shaker community. According to a plaque at the village, Polly was born in 1818 and lived with her family in Fairfield, New York. “In 1825, when she was only seven years old, Elder Calvin Green, a Shaker missionary, visited her family. Her parents chose not to join the Shakers, but Polly was inspired. His parents gave him their blessing and a new pair of shoes. She walked with the missionaries 70 miles through the snow to her new home.

Of Polly, Calvin Green remarked, “I thought she was the bravest, bravest little girl I had ever seen and the one worth having.” Later in life, Polly said, “A Shaker life has been mine since childhood, and I have never regretted the choice I made then.”

The Shakers were highly skilled farmers, furniture makers, weavers and cooks, who earned good incomes selling their wares. They were innovators in architecture, as evidenced by their Round Stone Barn (1826), the Brick Dwelling (1830), and the Poultry House (1878). The latter had large windows facing west; the constant light kept the hens laying even during the winter months.

A big source of income was the sale of seeds. They were the first to package seeds separately by type, so you weren’t just buying mixed bean seeds, but could focus on one type, like cranberries or beans. Shaker seeds were reliable and always of the highest quality. They also sold locally grown herbs, woven coats, furniture, and their famous baskets and boxes. Simplicity and elegance in everything they did.

As I walked through the buildings, I was again struck by the beauty of the design of the rooms, the barn, the Brick Dwelling. Light entered through the windows and rested on the blond woodwork around the windows. I was, of course, drawn to cooking. Their oven could bake seven pies at a time (pies were served at almost every meal) and they designed overhead cabinets with fine wire mesh on three sides, protecting the stored pies from mice and insects.

The round barn was particularly interesting at this time of year, as there were baby animals (calves, lambs and goats) housed there. A guide encouraged me to stroke the impressive horns of a very tame big black ram. “Go ahead, he doesn’t mind, and you’ll be surprised how hot they are!” They were, and I was.

The Shakers ate superbly, as they had all sorts of fresh ingredients on hand and were plentiful with butter and heavy cream, but since men and women engaged in hard physical labor, they worked on calories . There are Shaker cookbooks to check out, as well as recipes online, and I decided to try a two-crust Lemon Shaker Pie, which can be made with regular or Meyer (my choice) lemons.

Be sure to choose fruit with little pith. If you like marmalade, you’ll probably like this pie. It is beautiful and keeps well.