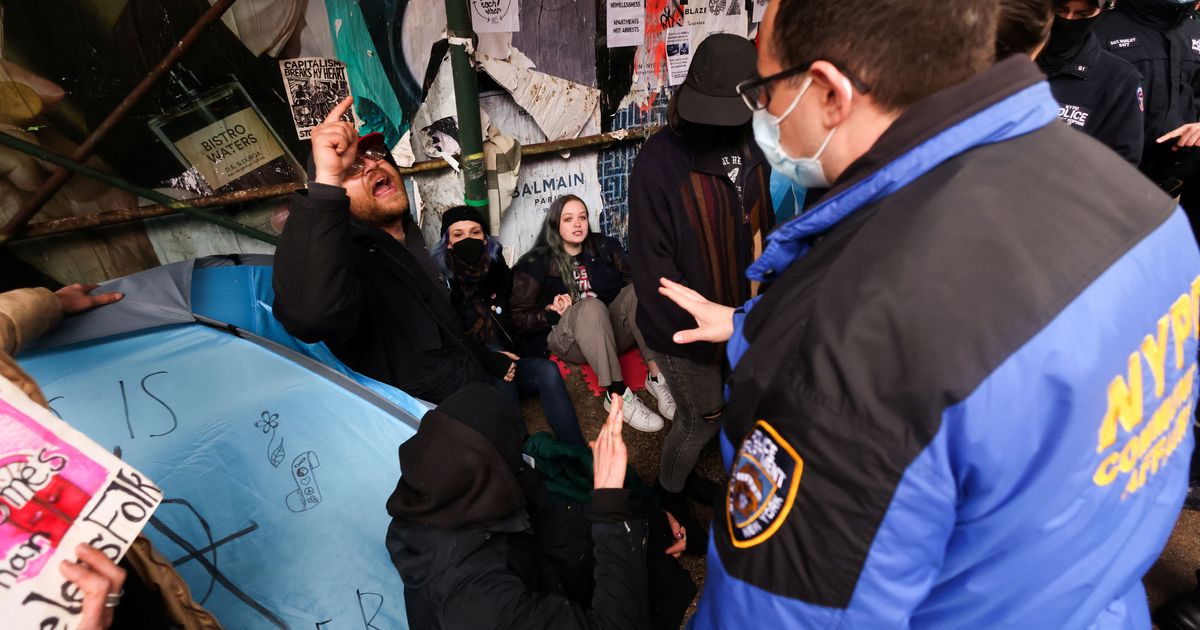 Early in the morning of April 6, a group of about 30 people quickly packed books, art supplies and legal documents from a line of tents on 9th Street and Avenue B in the East Village for put them in a nearby car in a safe place. In the pouring rain, a few people tidied around the tents with a dustpan before the New York Sanitation Department arrived to do the same. But all this activity was not in preparation for a move. The day before, a Department of Homeless Services employee had posted a notice on the scaffolding that the city would clear the encampment the next day. Less than 24 hours later, the small crowd of tent dwellers and activists were now preparing to defend the encampment.

The planned sweep of a camp the tent dwellers affectionately named “Anarchy Row” was just one of hundreds Mayor Adams ordered. The initiative, which has already cleared 239 homeless camps in 12 days, is apparently aimed at providing homeless people with a bed in the city’s shelters and connecting them to other services. But only five people affected by these sweeps have agreed to take a bed in the shelter system. The people of Anarchy Row had no intention of joining them.

While they waited, some were shopping for cigarettes; another brought canned coffee from Dunkin Donuts. “I’m scared to have a coffee right now because it would force me to go to the bathroom,” joked Johnny Grima, a tent dweller who prefers to go through Ramza, after the Final Fantasy video game character. The 37-year-old is generally in good spirits. But the impending sweep made him angry and exhausted. “I’ve been homeless on and off since I was a teenager,” he said. “I’m just sick of getting beat up by these fucking people, man.”

It wasn’t long before the police arrived around 8:45 a.m., dragged by the garbage truck. Protected by the scaffolding, the demonstrators formed a barrier with their bodies to prevent the police from reaching the five medium-sized tents behind them. Whenever negotiators from the NYPD or the Department of Homeless Services approached, the crowd chanted “Let them stay!” and “Housing, not shelter!” The police in turn ordered them, “Stand back, please!” But there was nowhere to go – the scaffolding around the tents locked in protesters and kept the police out.

City negotiators quietly offered to relocate residents to a shelter, shelter or hotel west of Times Square. But Ramza always answered no. “There are 200,000 vacant homes in the city,” he said. “I’ve been to a safe haven before. I have done my time. An officer also asked if residents could just pick up their tents for a bit and bring them back after city workers left.

“We want apartments and houses, not shelters and refuges,” said Sinthia Hamilton, another tent resident who, like Ramza, has always hovered near Tompkins Square Park. Ramza and Hamilton passed the baton all day, speaking to the press, negotiating with police and city workers. While Ramza relied primarily on housing statistics to make his point, Hamilton kept referring to a 1987 Supreme Court case in which the charges against protesters camping in Lafayette Park in Washington, D.C. , had been rejected. “I am making a constitutionally protected political statement,” she said.

Hamilton had moved to the city as a teenager in 1988, the year the park was more of a tent city filled with squatters, punks and homeless people. Even then, when police tried to extricate him, activists and local residents protested. It quickly turned into a riot when the police charged into the crowd. The park may not look like it did in the 80s or even during the Occupy movement, but for some it maintains that spirit. Anarchy Row is one of the few encampments in the city that fought the sweep in a concerted way (although the encampment at the south end of Tompkins Square Park, on 7th Street and near the chess tables, remained clear all winter).

“They absolutely can live here as far as I’m concerned,” said Pastor Will Kroeze, who leads Trinity Lower East Side Lutheran parish across the street. His parish has had a soup kitchen on the same corner for over 30 years. For Kroeze, Anarchy Row is as inseparable from its neighborhood as the park itself.

Police arrest members of the community who were protesting the clearance of the 9th Street homeless encampment.
Photo: Stephanie Keith/Getty Images

But the police did not want to leave. They taped the street on both sides. The Sanitation Department’s garbage truck had been parked in front of the camp for more than four hours, the driver hunched over his phone, bored. Around 1:15 p.m., activists began preparing everyone to leave or be arrested. A rumor circulated that the police had called ‘SRG’, his strategic response group often called during protests, and 15 minutes later they pulled up in a large white van. There were at least three officers for every protester. “It’s like we have the President of the United States hostage,” Ramza said. Councilwoman Carlina Rivera arrived but walked away from the protesters. An activist by the name of Kushtina walked around asking the attendees: “Do you agree to be arrested?” If they said yes, she wrote a lawyer’s number on the back of their blue pointer hand.

An officer holding a bundle of zippered handcuffs was walking around handing them out. “Things are about to kick off,” Kushtina said. The small crowd chanted louder and faster than before: “Keys, not sweeps!” “Let them stay!” and “Carlina Rivera, do something!” Press scattered in specially assigned areas. Police and riot cops closed in. Finally, an officer gave a final warning over a loudspeaker: “9th Street is now closed. Right now you are likely to be arrested.

They took Hamilton’s tent first. The crowd opened up so she could escape. “A 71-year-old woman lives there! Ramza shouted. The garbage truck crushed his tent and belongings, shooting out small plastic shards like crumbs. Six activists blocked the sanitation team and the police arrested them. When Ramza refused to leave his tent, he was also handcuffed and joined them in the police van. “I want an apartment for all my homeless people!” He shouted. “More shelters, more refuges!” The crowd fell silent.

Watching from the periphery, Hamilton wept. “I don’t want them to feel like I left them,” she told me, but she knew someone had to talk to the press and figure out what to do next. By 4:30 p.m. the police had mostly left, but a few officers remained to observe the crowd, which had split into small groups on either side of the road. A woman made tentative plans with Hamilton to get new tents and return right away, if not to the same site then somewhere nearby. Hamilton snorted. “I hope I made the right decision.”