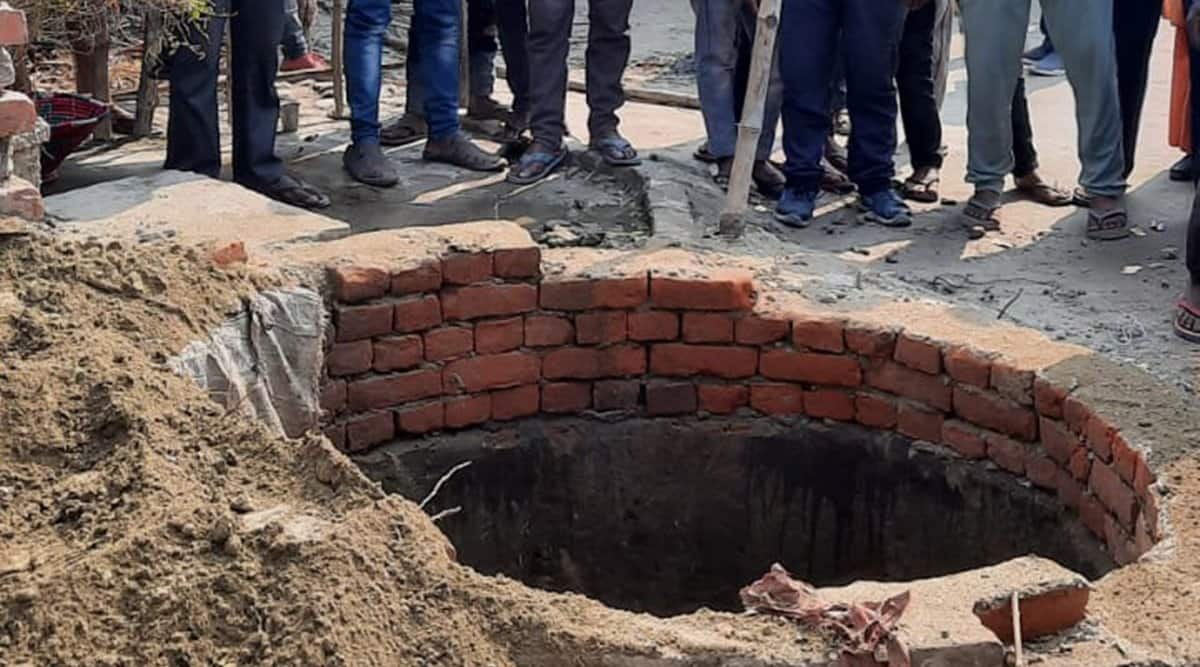 After much misadventure, trauma, anger among the inhabitants of the village UP

A row of burning pyres in this village in eastern Uttar Pradesh tells many stories. A crush of women desperately trying to get out of a deep, narrow well. A soldier’s daughter who died saving others. An ambulance that didn’t arrive until an hour and a half later. People put their daughters and wives to rest.

Two days later, Navua Naurangia in Kushinagar district is still accepting the night when many of its women and girls fell into decades-old unused well, after a cement slab covering it gave way under their weight. They were all at a wedding ceremony.

Five women and eight girls died. The youngest of them was Pari, aged one, who died in her mother’s arms.

Residents remembered trying to pull the women out with ropes, sarees, ladders and just about anything they could get their hands on, relying only on the light from their phones and torches.

Mixed in with their grief are several issues. Why was the well not repaired using gram panchayat funds? Why didn’t the ambulance arrive on time? Why did they have to fight for first aid with an allegedly drunk pharmacist at the community health center?

“It’s a 40-foot well that hasn’t been used for decades because its water has become dirty. There is a wedding ritual that takes place near the well. Most of the time this well was used because there was an open space nearby for women and girls to gather, dance and sing. That night was no different until we heard a woman running towards us shouting ‘kuwein mein auratein gir gayi hain’,” said Rajnish Kumar, mitra of the village bank and one of the first people to reach the place. The men first tried to lower the ropes and the saris, but the women and girls struggled to grasp them in the crowded space, while swallowing dirty black water. Then they tried to lower a cane ladder. It just sank in the water. Residents also called the police, the “108” ambulance service, and water tankers to extract water from the well.

“The police came quickly and tried to help. People from the administration also arrived. But an ambulance did not come for more than an hour and a half despite repeated calls. They are parked at the community health center, which is barely 3 km away,” said Anupam Kumar, who took some of the victims in his Alto to the CHC.

Outside his house, Ramesh Chaurasia, 40, was crying inconsolably. He had just lit the pyres of his wife, Mamta and his sister-in-law Shakuntala – and buried his niece Pari. The head of the community health center was transferred and the pharmacist suspended.

The new manager, Dr Prabhu Kumar, a paediatrician, tried to refute claims that they had failed to respond in time, saying ambulance services were run from a control room in Lucknow.

Drivers Jitendra Kumar and Ram Yadav said there were four ambulances at the CHC, two attached to the 108 department and two to the 102 women’s department. “When one was on overnight leave, the only ambulance parked was for the 102 service. The two ‘108’ ambulances were about 8-10 km away bringing patients,” Jitendra said. “We came back from there and went there. By then, people had brought most of the victims either in their private vehicle or in the police vehicle. »

The explanations ring hollow for the relatives of the victims.

Among them is Rita Kushwaha, 45, a widow who lost her youngest daughter, Radhika, 15. Her eldest daughter, Karishma, survived. Rita, who works as a farm laborer, had struggled to educate her children, including two sons, on her meager income. Unlike the men who earned between 250 and 300 rupees for a day’s work, she only earned 100 rupees. “Mahilaon ke liye kam rate hai”, tried to explain a resident.

“We both cycled to school together. Radhika was there next to me one moment…and the next minute she was gone,” Karishma said.