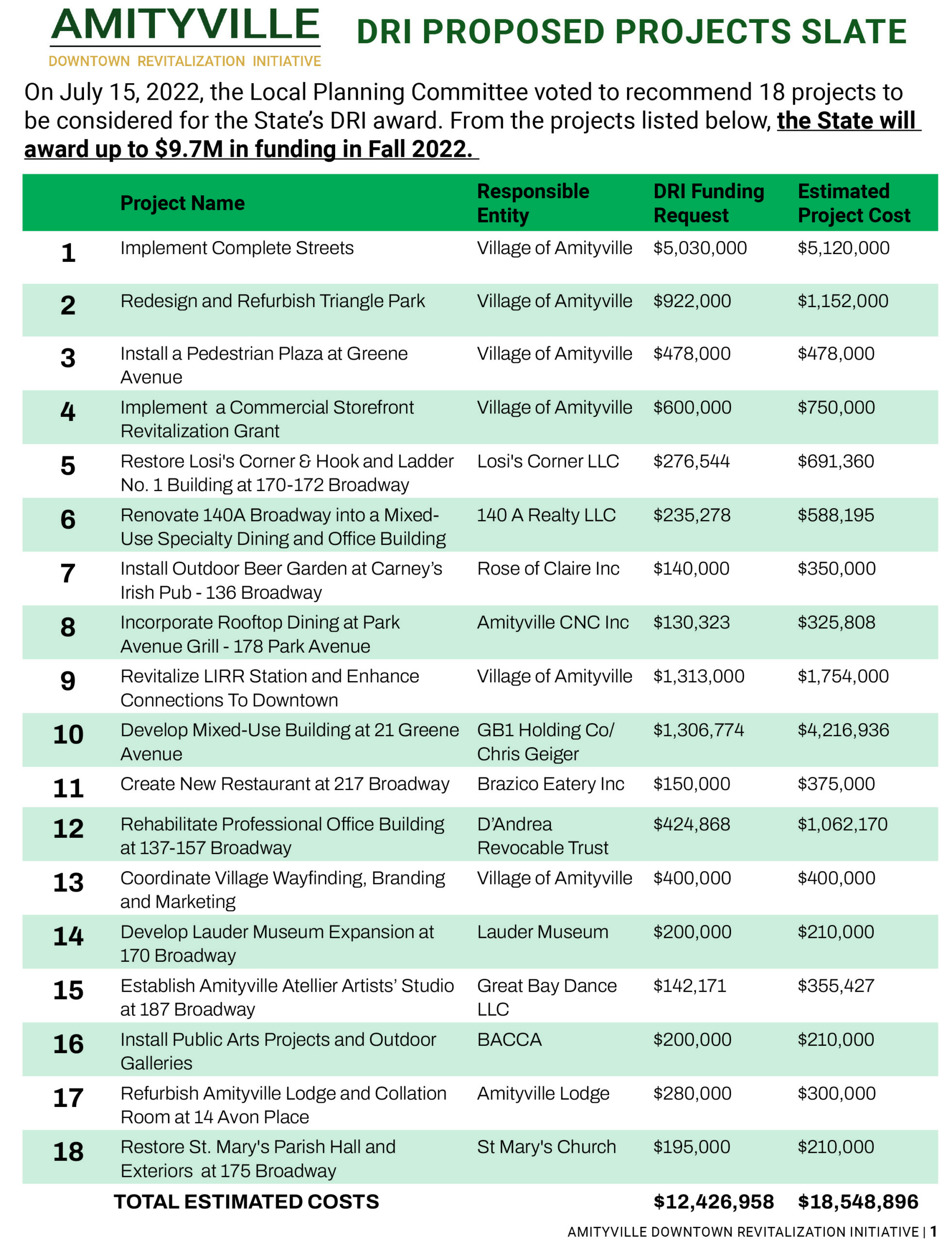 The Amityville Downtown Revitalization Committee submitted a list of 18 projects that members believe have the potential to provide economic vitality and growth to the village’s downtown. The submissions, made last week, represent six months of work by the committee and others since the village was notified that it had become eligible for $10 million in funding under the initiative program. revitalization of the state’s downtown area.

The projects chosen reflect what the committee sees as an opportunity to accomplish all of this in Amityville.

The 18 projects (see page 3 for specific details) are a combination of public and private undertakings which include a comprehensive study of street traffic in the defined “business district”, the installation of a pedestrian plaza on the Greene Avenue, Losi Corner Dining, Rooftop Dining at Park Avenue Grill, a new restaurant and art projects and more.

In total, the projects total $18.5 million in expenditures, including $12.4 the Village hopes will be paid for by the DRI grant. Additional grants would be sought to help offset the cost of the rest of the projects, according to village officials.

The list of projects was given to Jeannette Rausch of the NYS State Department, Theresa Sanders of the LI Regional Economic Development Council, and Edward Lamson, senior partner of BJH, the firm hired by the Village to help navigate it. in the process with Mayor Dennis Siry. . Once Rausch reviews and approves the proposals, they will be formally submitted to the state, Siry said.

“I think it was a good process, we did everything and we had a wide selection of proposals from many people; it was one of the biggest projects the village had undertaken with the community.

Siry said one of the key elements of the plan is the traffic study, which will give village officials a clear picture of what can and should be done to improve traffic flow throughout the business district. “It’s important that we hear from the experts,” he said.

The committee focused on the business district of the village, as required by the DRI grant, as some projects could not be considered because they did not fall within this geographical area.

“We looked at some really solid potential projects; some were good but outside the geographic area and some we just couldn’t include at the moment,” he said, adding with the mayor that the village plans to seek grants and funding for some of the projects not included in the proposal.

O’Neill said he was particularly excited about the Greene Avenue and Losi’s Corner projects. “It’s very important to the Triangle area and the fact that the Hauswirth family had the foresight not to let the village knock down the original fire station which had stood there for many years has now enabled this to become the seed to revitalize the whole corner.”

Administrator Kevin Smith, like the other leaders, said he was impressed with the variety of projects the village was asked to consider and the huge contribution from the community.

“I’m optimistic about it and excited for Amityville,” he said. “We can’t just look at how Amityville is now; we have to think creatively about what that could, potentially look like, and that’s difficult but exciting.

All projects must start within two years to be eligible for funding and if one of the projects is rejected, the funds allocated to it are not lost and are not applied to other projects.

“I think that’s a good list,” said Mayor Dennis Siry, who added that he and other village officials said they wished they could have included all of the projects proposed by the community.

To view the projects, go to amityvilledri.com