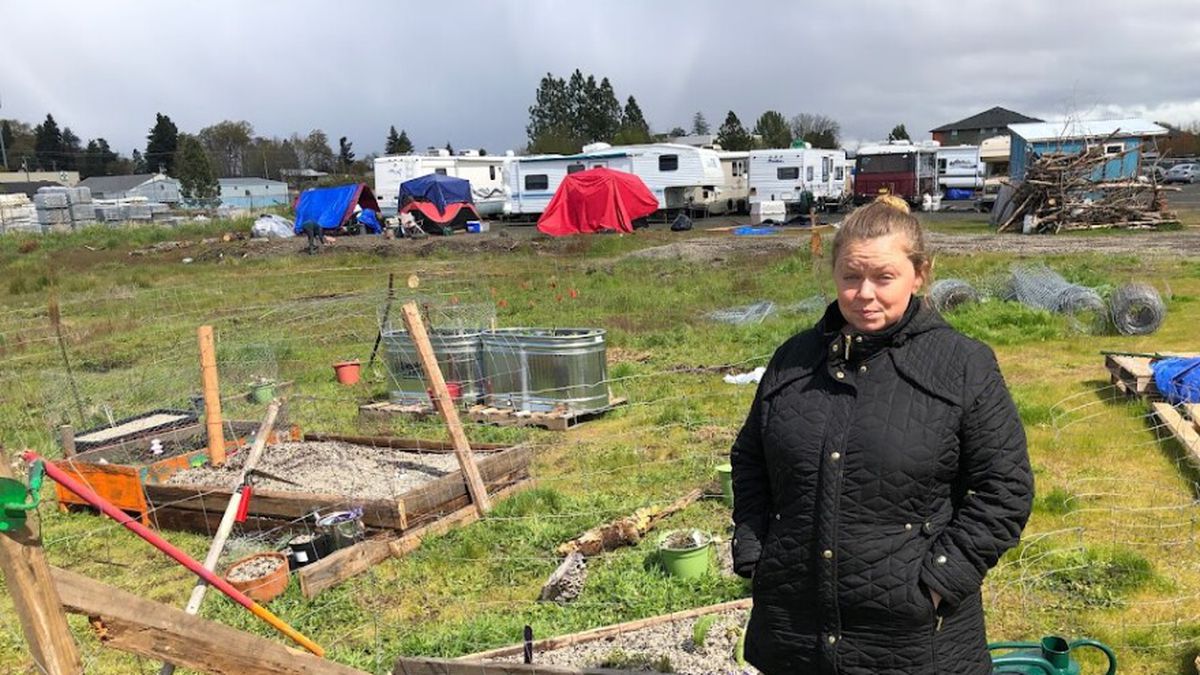 As the Eugene Homeless Site Continues to Grow, So Does Hope

What will eventually be Eugene’s largest transitional shelter site is about halfway there. Everyone Village in West Eugene aims to provide 100 spaces on its acreage and provide residents with a safe and secure environment.

Among those residents is Elizabeth Deffenbaugh. 33. She wanted to leave the cold, damp streets of Eugene. Unable to meet tenant qualifications and struggling with disability and PTSD, she spent several years living in a tent near a dog park.

“It’s just a recurring problem in my life since childhood,” she told KLCC. “I grew up in foster care and ran away from that, and just traveled with hippies, so I never really had a home – a stable home – ever.”

On top of that, Deffenbaugh said she often felt harassed by Eugene city employees and police, who sometimes forced her to move and ticketed her if she didn’t comply quickly enough.

“Under the guise of watching you and making sure you are safe. Just bullying, basically.

In February, Deffenbaugh escaped this chaotic existence on the streets. She is now at Everyone Village, which opened its 3.5-acre site last October. At last check, more than 40 residents live here, in shelters such as RVs, pallet houses and Conestoga huts.

Gabe Piechowicz is the village chief. He said residents go through an application process and must abide by community rules. This includes a checkpoint between the village and the main entrance, and no substances other than cannabis and tobacco.

“If someone just comes in to ask to see someone inside, we’re neither confirming nor denying that someone lives here. We take messages and we really try to protect our villagers, because some of them have a lot of security problems.

Piechowicz — a Christian pastor from Everyone Church — also leads spiritual services. He said he was happy to help everyone on their journey, regardless of their faith or belief system.

“It’s so individual, like any human story,” he said. “And so what we’re pioneering here is developing natural, relationship-based talks with people as they move in to find out where they’ve been, where they’d like to go, what their goals and dreams are, and then develop a plan so they can achieve them.

And so each villager essentially has their own unique timeline when it comes to learning and preparing for residency and off-site employment, Piechowicz added.

Local authorities have supported the development of Everyone Village. Kelly McIver, spokesperson for the City of Eugene’s homeless response, said the city has invested $170,000 in site development funding, with an additional commitment of $364,000 a year in operating expenses. . He said that in addition to Piechowicz’s enthusiasm, Everyone Village’s innovative model has attracted support from corporate and community partners, including the Rexius family who donated the acreage.

This is in addition to a number of other sites developed for homeless people across Eugene, run by various organizations, including St. Vincent de Paul and the Eugene Mission, among others.

“Which is a really good thing, we want to have diversity in the types of things that are offered to people,” McIver said. “Because trying to solve homelessness is certainly not a one-size-fits-all problem.”

Recently, 14 new residents came to Everyone Village after the city dismantled a large homeless encampment in Washington-Jefferson Park in March. Some homeless advocates have complained about the guarded checkpoint and the restrictions, a criticism McIver acknowledged.

“Sometimes there are people who are reluctant to believe that people should be able to have guests and be able to socialize where they live.

“We’re trying to move people out of an unstructured environment where they’ve been basically at the mercy of the outside world, where they’ve had very little boundaries or protection.”

One person who appreciates this security is Toni, a 56-year-old mother from Arizona. At Everyone Village’s request, KLCC is only identifying him by his nickname, to protect his privacy and security.

“I could go in any direction now, whereas before I had to work to survive,” she said. “You know, I can actually dream and make dreams come true now, where before it was like, ‘That’s never gonna happen.'”

Toni said every day on the streets was like climbing Mount Everest. But in her warm, dry palette shelter with access to cannabis and spiritual gatherings, she can focus more on art and less on survival and solitude.

“They work together to make it a family, and it works. We learn to be normal people.

There are still around four dozen sites to be installed in Everyone Village, but work continues to make it a transformative space. In a section reserved for his garden, Deffenbaugh recently watched his vegetables grow. She also watches over a killdeer family that has built a nest nearby.

“Yeah, we had cats chasing the killdeer. And then I also tried to keep people at least 20 feet away from them because they are a protected species of migratory bird.

Deffenbaugh wants to quickly find long-term housing and eventually start a home-based business. For now, she feels safe in Everyone Village and enjoys her own piece of peace here.

“I use it as my quiet zone. I don’t allow negativity here. Only positive thoughts and words, because it’s better for people and plants that way.

Meanwhile, the City of Eugene continues to develop other strategies to address homelessness. A recent Chamber of Commerce report found that more than 3,100 people in Lane County were homeless on August 21, 2021, and only 42 were moved into housing in the same month.

Note: A similar version of this story was published recently on the NYU Journalism site, The click.

Heavy rains hit Gujarat; 3 people from the same family killed in the collapse of a wall