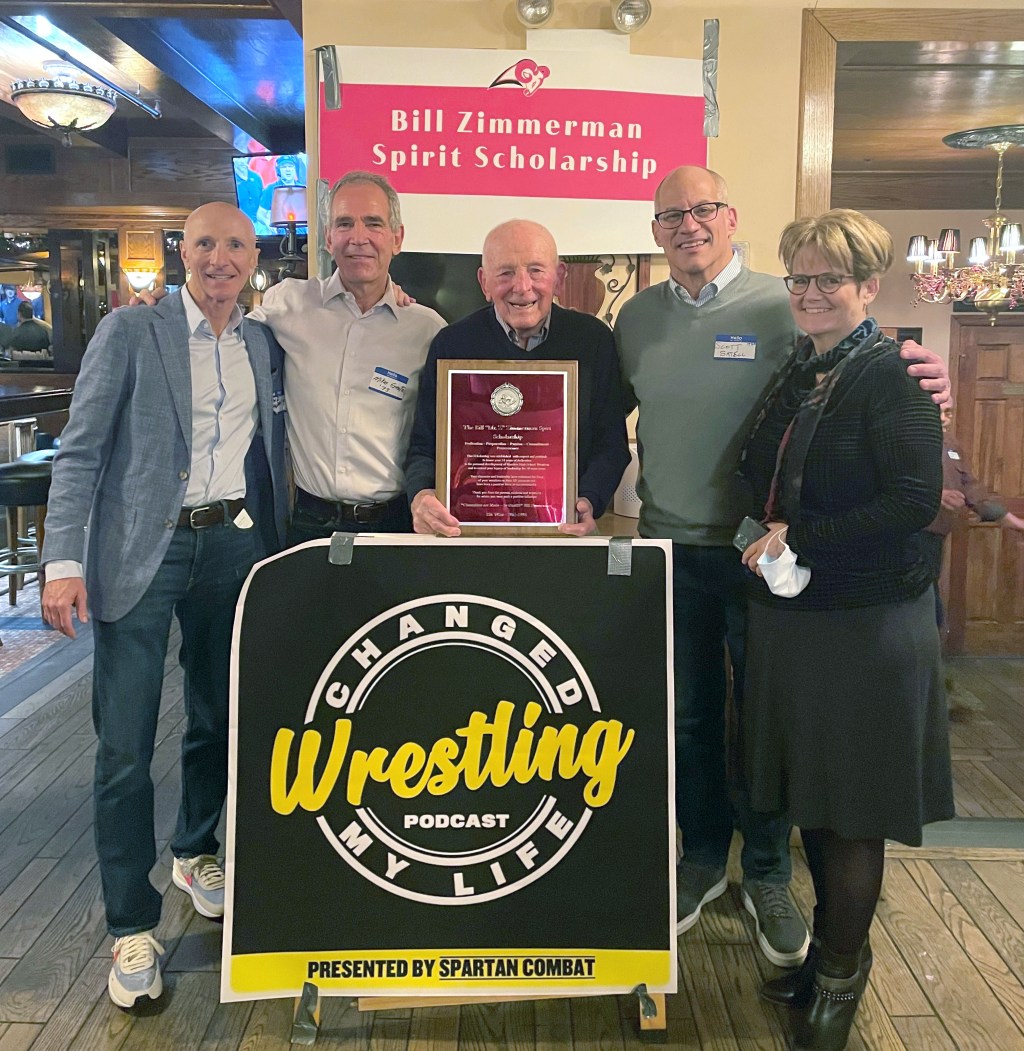 At Harriton, “Z” is for the spirit – Mainline Media News

Do you remember a favorite teacher from your high school years? A group of former Harriton wrestlers remember it vividly.

“Z” is the magic letter. It was the only letter David Halpern, Mike Gretz and Scott Satell had to mention when they held a zoom call earlier this year with 40 former Harriton wrestlers, announcing a plan to create a scholarship in honor of the beloved trainer and teacher, Mr. Z, and the money started pouring in. The goal was to launch a Bill Zimmerman (Mr. Z) Fellowship in the Township of Lower Merion, a fund that would last at least fifty years to honor MZ’s legacy

Mr. Z only coached each of the wrestlers for the three years they were on the team, but the lessons they learned from him lasted a lifetime. A very humble Mr. Z was thrilled and smothered when 70 of his former student wrestlers showed up on Saturday, December 4, at a tribute dinner in his honor at the Great American Pub in Conshohocken. And the wrestlers had flown in from all over the country, not just those who stayed in the western suburbs. The coach is a very humble guy, and he couldn’t believe that so many of his former student-athletes would go out of their way to honor him – and to donate to a scholarship fund in his honor.

Raising money for a scholarship to help needy wrestlers or other student athletes in Harriton and Lower Merion was an idea of â€‹â€‹Mike Gretz, who turned to his friends Satell and Halpern for help. Apparently, Halpern, who has his own law firm in the city center, can find anything, according to his pals. And he found the 70 people who showed up at the tribute dinner.

Now Mr. Z had been a coach from 1961 to 1994 when he retired, so many of the guys who attended the dinner hadn’t seen or spoken to him for 50 years. But they never forgot the lessons he rooted in their characters. Since being retired for more than 20 years, Mr. Z has been amazed to find so many former wrestlers at his tribute dinner. â€œSome of these guys are in their 70s! ” he said. And Mr. Z, who is almost 90 years old, recognized most of them.

Mr. Z attended Abington High School and was captain of their wrestling team in 1950. He attended West Chester University and wrestled there for four years. He then served in the Marine Corps and the discipline he learned as a Marine has remained with him his entire life.

Halpern’s mother, Arlene Rudney Halpern, praised Mr. Z and the wonderful role model he was to his sons David and brother Michael, as well as to all the other boys on the Harriton wrestling team.

With his record of 336 wins, 122 losses and 2 draws, Coach Z was one of the most “winning” wrestling coaches in Pennsylvania Interscholastic Athletic Association (PIAA) history and was inducted into the Temple. of fame from the Pennsylvania Wrestling Coaches Association (PWCA). .

The Bill Zimmerman Spirit Fellowship will award $ 1,000 per year to each of two needy recipients, preferably one involved in wrestling. But if there is no needy wrestler on the Harriton team, the scholarship will go to a needy college student.

Satell commented, â€œRaising money was the easiest thing in the world. We never even asked for money – we said we were making the purse – Dave and I had a zoom call last year with 40 of the top wrestlers – everyone had the same experience – everyone said Mr. Z had a huge impact on their lives – the struggle had a huge impact – a voice on your shoulder, guiding you to do things the right way. It was universal. You knew how much everyone loved the guy, the influence he had on their lives. But that’s a lot of money to be raised in about 6 weeks. I said at the celebration – we didn’t have to harass people – we just said “Z” – and people wanted to give. “

Diane Dibonaventuro, who sits on the LM scholarship board, said: â€œI had the pleasure of meeting Coach Z about a month ago and listened to many testimonials from his former players. What a special man and an incredible trainer. Not only did he have a huge winning record (including a multi-year undefeated streak), he also helped develop and nurture the character of the students he coached and taught.

For fifty years, the $ 100,000 raised will fund the Bill Zimmerman Spirit scholarship!

Bonnie Squires is a communications consultant who writes weekly for Main Line Media News and can be contacted at www.bonniesquires.com. She hosts the television show “Bonnie’s Beat” on MLTV-MAIN LINE NETWORK.