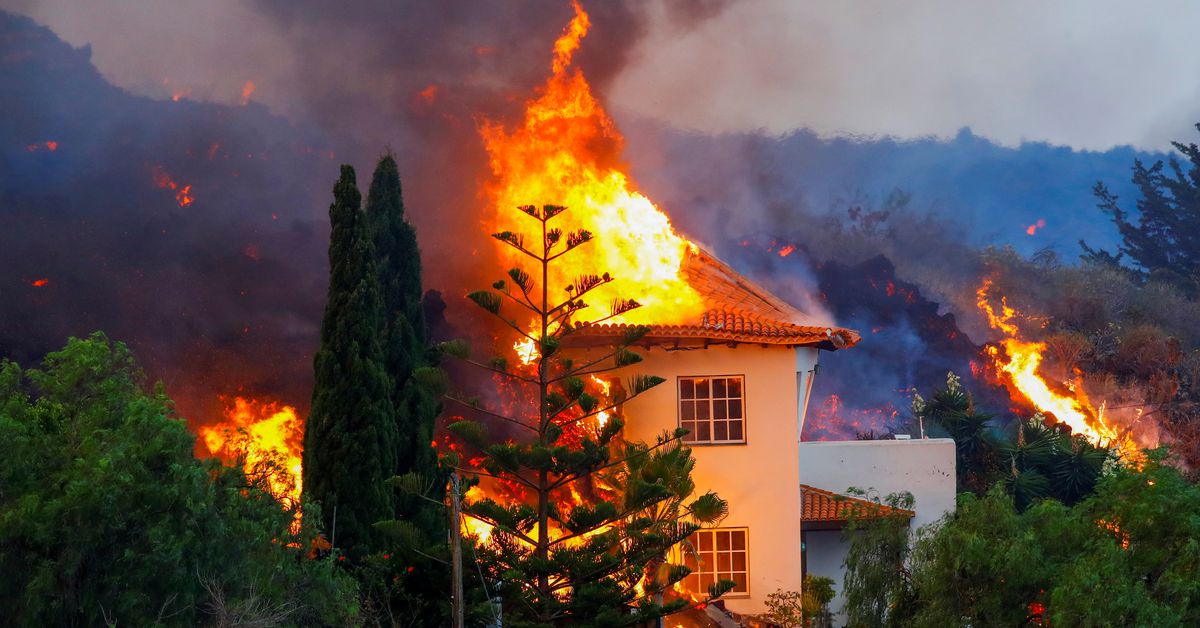 LA PALMA, Spain, Sept. 20 (Reuters) – Lava flowing from the first volcanic eruption in the Spanish Canary Islands in 50 years forced the evacuation of 5,500 people and destroyed around 100 homes, but the streams were advancing more slowly than expected, authorities said on Monday. .

The flow of molten rock will not reach the Atlantic Ocean on Monday evening, as was estimated earlier, an official said. Experts say if and when this happens, it could trigger more explosions and clouds of toxic gases.

“The movement of the lava is much slower than it was initially (…) There has not been much progress during the day,” said local emergency coordinator Miguel Angel Morcuende during a press briefing Monday evening. He said the stream made its way halfway to the coast.

A new lava flow erupted from the volcano late Monday, prompting the evacuation of residents of the city of El Paso, the regional emergency agency wrote on Twitter.

The volcano erupted for the first time on Sunday, hurling lava hundreds of meters into the air, engulfing forests and sending molten rock toward the ocean above a sparsely populated area of ​​La Palma , the most north-western island of the Canary Islands archipelago.

No deaths or injuries were reported, but drone footage captured two tongues of black lava cutting a devastating swath across the landscape as they moved up the volcano’s western flank towards the sea.

A Reuters witness saw the stream of molten rock make its way through a house in the village of Los Campitos, igniting the interior and sending flames through the windows and onto the roof.

Around 100 homes have been affected by the volcano eruption, said regional emergency manager Jorge Parra, adding that residents should not fear for their safety if they follow authorities’ recommendations.

Six roads on the island have been closed, officials said.

Regional Chief Angel Victor Torres said the damage would be substantial. “He is still active and will continue to be so over the next few days,” he added.

A house burns down from lava from a volcano eruption in Cumbre Vieja National Park in Los Llanos de Aridane, on the Canary Island of La Palma, on September 20, 2021. REUTERS / Borja Suarez

“It was horrible,” said Eva, a 53-year-old tourist from Austria. “We felt the earthquake, it started in the morning … Then at three in the afternoon the lady from our house came and said we had to pack everything up and leave quickly.”

“We’re happy to be going home now,” she said at the airport, boarding a return flight after cutting her trip short.

Tourism Minister Reyes Maroto said the eruption was “a wonderful sight” that would attract more tourists to the tourism-dependent archipelago – comments which have been criticized by the opposition at a time when many locals lost their home.

Some of the tourists at the airport disagreed with Maroto. “We want to leave as quickly as possible,” said Wienard, a 55-year-old social worker from Salzburg.

But at least one visitor was happy.

“I felt like a little kid inside, very excited,” said Kabirly, 26, a Belgian market researcher. “It was also my birthday yesterday so it was kind of a candle on the island cake!”

About 360 tourists were evacuated from a resort town in La Palma in the aftermath of the eruption and taken by boat to the neighboring island of Tenerife early on Monday, a spokesperson for ferry operator Fred Olsen said. In total, more than 500 tourists had to leave their hotels.

Anticipating reduced visibility, the maritime authorities on Monday closed navigation to the west of the island.

La Palma was on high alert after thousands of tremors were reported in a week in Cumbre Vieja, which belongs to a chain of volcanoes that experienced a major eruption in 1971 and is one of the most volcanic regions. most active in the Canaries.

Prime Minister Pedro Sanchez visited some affected areas and met with officials on Monday, then took to Twitter to welcome the response of emergency personnel.

The airspace around the Canaries remained open with no visibility issues, Enaire Civil Air Authority said after a local airline canceled four flights between the islands.