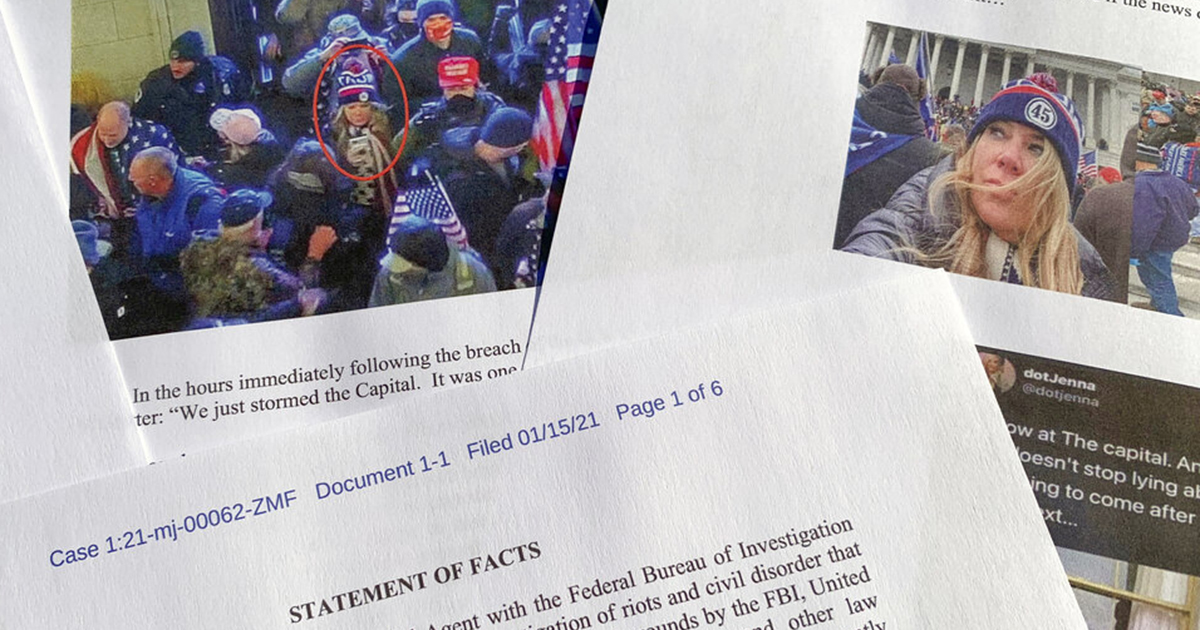 (AP) – A real estate agent in the Dallas suburbs who flaunted her involvement in the Jan.6 riot at the U.S. Capitol on social media and then bragged that she was not going. prison because she is white, has blond hair and a good job was sentenced Thursday to two months in prison.

While some rioters convicted of the same misdemeanor were only given probation or house arrest, prosecutors requested the incarceration of Jennifer Leigh Ryan of Frisco, Texas, saying she had demonstrated a lack of candor and remorse for his actions when the pro-Trump mob attacked the Capitol Building and Congress-delayed certification of Joe Biden’s Electoral College victory.

They also said Ryan’s belief that she was safe from penalties shows that she fails to understand the gravity of her crime.

Ryan was not facing a more serious driving felony, but U.S. District Judge Christopher Cooper said she was still part of the crowd that outnumbered police in an attack that resulted in the death of five people and that will have a lasting effect on government institutions.

Although Ryan said she was sorry for her actions, Cooper asked if she had any remorse and was following the law.

“Your actions since January 6 make me doubt some of these things,” the judge said.

Prosecutors said Ryan flew to Washington on a jet chartered by a Facebook friend, described Trump’s pre-riot rally as a prelude to war, live streamed his entry into the building as the alarms rang, took part in chants of “Fight For Trump”, tweeted a photo of herself next to shattered windows outside the Capitol and later said she deserved a medal for it. that she did.

Her lawyer replied that she was only in the building for two minutes, that she had not acted violently and that she had the right to express herself on social media under the First Amendment.

The judge then referred to Ryan’s March 26 tweet in which she wrote, â€œI definitely won’t go to jail. Sorry, I have blonde hair, white skin, a great job, a bright future, and I’m not going to jail. Sorry to rain on your hate parade. I did nothing wrong.”

In a letter to the judge, Ryan denied believing she was immune from punishment, saying she responded to people who made fun of her appearance and called for her imprisonment. She said her lawyer told her at the time that prosecutors would recommend probation.

â€œI was attacked and I was responding to them,â€ Ryan said in court.

She is the 10th person accused in the January 6 attack to receive a prison or jail sentence. More than 650 people have been indicted for their actions on Capitol Hill.

Prosecutors said Ryan had since played down the violence on Capitol Hill and falsely claimed to probation officials that she didn’t know there was a riot until she came to Capitol Hill, even though she did. was recorded in a hotel room watching media coverage of the rising rioters. the walls of the Capitol.

After the riot, Ryan said she faced backlash that included death threats, public heckling and graffiti painted on her real estate signs. She said she had to change her name and dress up in public.

Ryan tweeted a photo of herself next to broken windows and holding her fingers in a V sign, with a caption saying, “Window to the Capital. And if the news keeps lying about us, we s ‘will then attack their studiosâ€¦ â€

Shortly after, Ryan posted another tweet about a mob damaging material belonging to news outlets, including the Associated Press. She tweeted that it was a “cool moment” when the rioters “came to town with the AP equipment.”

Ryan is expected to start serving his sentence in January.

Also on Thursday, an Air Force veteran was sentenced to three years’ probation for violating the Capitol and taking photos and videos inside the rotunda for about 10 minutes.

Jonathan Ace Sanders, 61, of Vincennes, Indiana, served 20 years in the military and received a Purple Heart, but said he failed his training on Jan.6.

â€œI wasn’t cheated, I wasn’t pushed, it was my failureâ€¦ I’m sincerely sorry,â€ he said.

Sanders is among dozens of veterans and active service indicted in connection with the insurgency. As they have done in other cases, prosecutors argued it should mean a harsher sentence for Sanders, as his training should have told him to leave as other rioters attack Capitol Hill cops and vandalize building.

U.S. District Judge Carl Nichols refused to impose the two months of home confinement recommended by prosecutors. The judge said Sanders’ military career was commendable service to his country, but should have taken him away as well.

â€œIn my opinion, his service goes both ways,â€ Nichols said. “It should have been obvious to him that this was a violent riot.”

Earlier Thursday, a Maryland woman who joined the mob attack was also sentenced to three years of probation, including two months of house arrest.

Brittiany Angelina Dillon said her actions on Capitol Hill were “inexcusable and unacceptable”. Judge Dabney Friedrich said the texts showed Dillon clearly anticipated the violence when she visited Washington on Jan.6 and appeared willing to do her part to prevent Congress from certifying Biden’s victory.

According to prosecutors, Dillon walked through a crowd of rioters to approach an entrance to the Capitol, but was pushed back before she could pass the building’s threshold.

The judge said she was troubled by Dillon’s statements before and after the riot, including his reference to law enforcement officials as “devils.”

“The attack in which she participated was an attack on our government institutions, the rule of law and our democratic process,” Friedrich said. _____ Billeaud reported from Phoenix and Whitehurst of Salt Lake City. Associated Press reporter Michael Kunzelman contributed from College Park, Maryland.