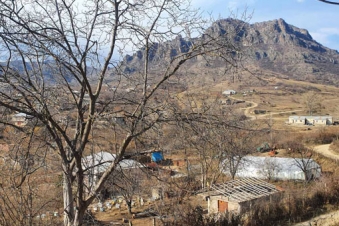 Construction of a house completed in the border village of Paravakar

PanARMENIAN.Net – Vigilance is a mandatory criterion in Paravakar; enemy provocations can occur at any time. The villagers who have lived in this state of mind for many years are both soldiers and people who cultivate the land; however, they are not complaining. They show patriotism through daily work and perseverance, even if it is not easy. They love their native village and grow stronger. Such is also the life of the Gharabaghtsyan family.

Marat’s family lived in a semi-basement structure. Walls soaked with water after the rain… lack of roof… traces of humidity in the corners of the house… Three children were brought up in a two-room basement built in Soviet times without basic necessities. This year alone, thanks to the support of partner organizations, the father of the family was able to complete the construction of the house begun 25 years ago.

The troubled life has already become a memory; the house is built, the Gharabaghtsyans have settled in the house. Viva-MTS and the Fuller Center for Housing Armenia adhered to their value system to support villagers living on the border. The first project in Paravakar was implemented in 2016. Since then, the housing problem of 10 families there has been solved.

“Those who live in the border areas show us an example of true patriotism. Neither the hardships of life nor the real threat are capable of breaking the spirit of these Armenians and sweeping them from their roots. Your will translates into compelling us all to appreciate what we have, to dedicate ourselves to the prosperity of our country through hard work, and to be united. Our commitment to support you is also strong. Problems will be solved when we are all absolutely united,” said Ralph Yirikian, Managing Director of Viva-MTS, during the video call.

“During the cooperation with Viva-MTS, the border villages were in the spotlight. The feeling of having a strong back is very important; we try to give this feeling to border families. Ten families, in the village of Paravakar alone, received support to complete the construction of their homes,” said Ashot Yeghiazaryan, president of the Fuller Center for Housing Armenia.

Karen, the youngest son of the Gharabaghtsyans, has been serving in the army for a year now. He had left for the army before the work began. So far he has enjoyed the happiness of having a decent home for a short vacation.

“Three of the four men in my family are soldiers. The youngest, Karen, has been in the service for a year. He slept in his new room during the holidays. My husband and eldest son are contract military. Only one of our sons is still next to us and his family. By the way, my other son got married in the newly built house. Now everything has changed; soon two more grandchildren will be born and the house will become more comfortable,” said Gayane Alaverdyan, the housewife.

The construction of the Gharabaghtsyan family house was delayed due to the 44-day war. The men pledged to defend their homeland, delaying the work of ensuring the well-being of their families. Now the family lives with new dreams. The parties implementing the housing program, Viva-MTS and the Fuller Center for Housing Armenia, consider important not only the visible result of the project but also the psychological impact on the families.