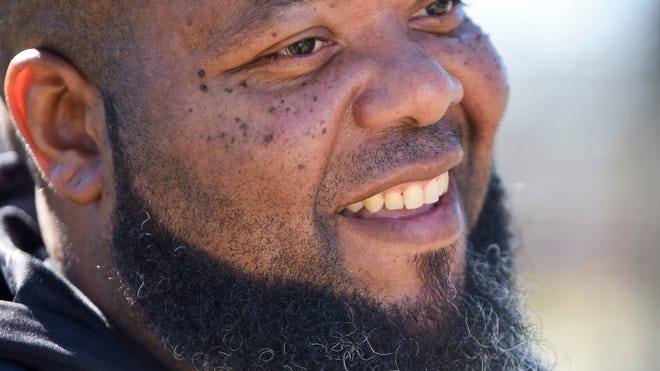 Nick Rankins wholeheartedly believes that raising good kids takes a whole village. He saw the mantra in action as he grew up in Mobile County surrounded by family, friends and neighbors who felt so much more than that.

Since moving to Montgomery in 2001, Rankins has worked every day to bring that sense of love and community to this town.

People know him for a myriad of reasons and he goes by a different name with every hat he wears. When Rankins attends football games in Lowndes County, people know him as the athletic director. Inside Calhoun School, he is the suspension director at the school. At Alabama State University, he is a notable alumnus, and after school at the Boys & Girls Club, he is a dedicated volunteer.

Among many young black men in Montgomery, however, Rankins is a mentor, teacher and father figure. These are the titles that matter most to him.

Since starting his non-profit mentorship program, Young Men on Mission, in 2017, Rankins saw 40 children graduate from the organization. He considers everyone as a member of his family.

For these reasons, Rankins is the Montgomery Advertiser Community Hero for February, an honor sponsored by Beasley Allen Law Firm.

Rankins jokes that he has 40 sons and one daughter. His 5-year-old princess was born the same year he accepted the first group of Young Men on a Mission boys. Technically, she’s an only child, but with all of her father’s mentees, she doesn’t feel like one.

As some boys leave for college and others join the program from elementary school, the Rankins family only gets bigger.

“If any of my young men have a problem, they know they can reach out to me anytime, call me,” Rankins said. “I’m always there for them, a listening ear to just be there for them. It’s more like a family.

Problems, anxieties and stressors don’t start and end with a 9 to 5, so neither does Rankins. His phone is rarely silent, and the mentees know they always have the option of spending the night on Rankins’ couch if trouble arises at home.

Rankins knows that burnout is a risk when you spend so much time working. In his circles of teachers, he sees teachers tired of “raising other people’s children” on a daily basis, and high rates of violent crime in town can be daunting. Yet his passion for change and his reason for wanting it keep him going.

“I lost a lot of people in my life: my great-grandparents, my brother, my sister, my father,” he said. “I’ve had a lot of deaths, and everything I do, I kind of say, is for them. I know the love they had for the community, for the people.

When Rankins first came to Montgomery for his bachelor’s degree at Alabama State University, he said he found a town that seemed to have forgotten to be a community. No one around him knew his neighbors, and he saw thoughtless violence taking the place of simple conversation.

Although Rankins doesn’t think these issues are completely resolved, he has seen noticeable changes in his last decade on the job. He hopes to see even more of a jump in the next decade.

“I just want to see us in the next 10 years be able to go out on a weekend and say, ‘No one was killed today. No one was hurt today,” he said. “I want to be able to see us walking down the street and people talking to each other and knowing that I’m there for you and you’re there for me.”

Rankins remembers living within walking distance of his great-grandparents as a child in rural Calvert, Alabama. Every Sunday they cooked lunch for the community, and he and his siblings delivered plates to the surrounding streets.

In every home he stopped at, Rankins remembers feeling warmed, loved, and like part of one big, tight-knit family. This is the vision he has for the children of Montgomery today.

Kendarius Matthews, one of his mentees and graduate of the program, says Rankins has already succeeded.

“Growing up without having that father figure in my life, well, Nick filled that gap for me,” Matthews said. “It exposed me to a lot of different positive things and opened my mind and my eyes to different opportunities that I never thought I would have.”

Matthews first met Rankins almost 10 years ago. He was finishing sixth grade at the time, and his single mother was working hard to care for him and his sister. Matthews remembers feeling like he had no one to turn to when things got dark.

Rankins, who was then running a different mentoring program, took him in and changed Matthews’ perspective.

From the tough days at school to the day his grandmother died, Matthews found ways to talk about his issues instead of keeping quiet.

“Nick made it clear he would always be there for me,” Matthews said. “You really don’t find many people like that in life, especially for me growing up.”

As well as being someone to lean on, Matthews said he and the other boys on the program see Rankins as inspirational and motivating. He would come to their minds before they made mistakes, and they felt responsible to him.

Matthews still occasionally calls Rankins “Pop,” and he’s following in his father figure’s footsteps as an education specialist at ASU and as vice president of Young Men on a Mission.

He graduates in May.

Not one, but many

From college graduates to business owners to military officers, Rankins’ young male mentors have done so much with their lives. Notably, there’s one place where none of them have finished that makes Rankins particularly proud.

“No one is in jail. They didn’t become statistics,” he said.

Throughout years of trial and error in how he approaches Montgomery’s youth, two tactics remain consistently successful for Rankins.

The first is love. People would be surprised at how many kids in this town are never told they have someone who loves them, Rankins said. He makes sure to tell all of his children that he loves them. It goes far.

The second tactic is exposure to a life outside of what they know. From trips to Washington, DC, and Gatlinburg, Tennessee, to Sunday visits to churches all over Montgomery, Rankins reminds the young men in his program that there is a world beyond the walls that make up their homes and schools.

Another way to do this is to encourage the boys to help take care of the Nixon-Times Community Garden. This is a single piece of land in West Montgomery where they grow vegetables to eat, raise chickens for fresh eggs and take care of two goats.

He took over the garden from community leaders Voncile Gregory and Lucille Times a few years ago. He gives the children he mentors a sense of duty, provides free produce and eggs to community members, and provides a gathering place for neighbors.

“Nick has done with the garden what no one has done with it,” said neighborhood resident Janie Brooks. “We weren’t a community thing with it before, so Nick did it for the community, which is good. We’re having fun here.”

Brooks lived across from the garden for years, but she hadn’t seen any youngsters involved until Rankins took over.

She and the community are working with him to make a difference in West Montgomery, she said. Still, Brooks isn’t ready for the change to stop, and Rankins agrees.

For now, he plans to continue the work until he tires or achieves his vision of community for Montgomery, whichever comes first.

Hadley Hitson covers the rural South for the Montgomery Advertiser and Report for America. She can be reached at [email protected].