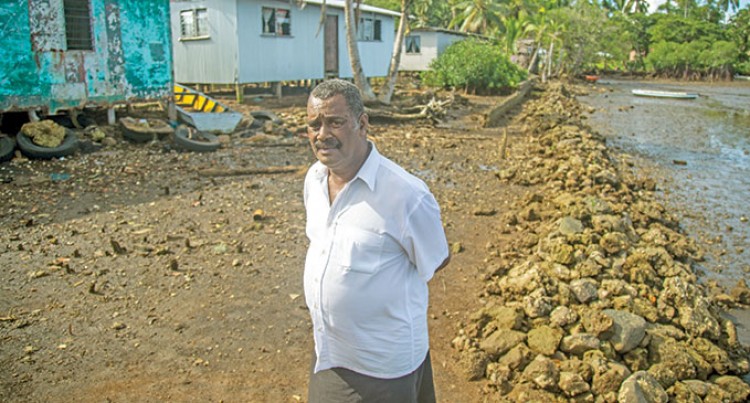 More than 20 houses on the coast were strongly impacted by the intrusion of sea water in the village.

More than 20 families from the village of Veivatuloa in the province of Namosi have moved further inland.

This was to escape the rising sea level that had forced its way into the village.

The village chief, Leone Nairuwai, said an old dyke built by the villagers could no longer protect the village from rising sea water levels that broke through the structure.

Mr Nairuwai said the seawall had been partially damaged and families living near the shore were bearing the brunt of the rising tides.

“It’s something new that we’re seeing; the effects of climate change that we are starting to feel is something we cannot stop,” Mr Nairuwai said.

“There was a levee that was built a few years ago, the water never exceeded the height of the levee when it was built, but now it goes over that levee and the water goes straight into the village.”

He said that at high tide the water would enter the village at 50 for 75 meters high.

More than 20 houses on the coast were strongly impacted by the intrusion of sea water in the village.

“The earth is washed away and it has collapsed,” he said.

“We planted mangroves to try to help, but sometimes even that doesn’t help.”

Their advocacy was also highlighted during the Namosi Provincial Council meeting held in the village last Thursday.

“Today more than 20 families have moved further inland to build their homes. This is where they are now,” he said.

“We have pleaded with the government and they have confirmed that this is the third project this year according to the province’s plans. I thank the government for that. »

Villager Anare Sovuna, who lived in a house near the shore, said the dike that existed before served as a shield, but with the impact of rising sea levels, it could no longer protect them from the waves. entering the village.

He said government assistance was needed for the safety and well-being of family members.