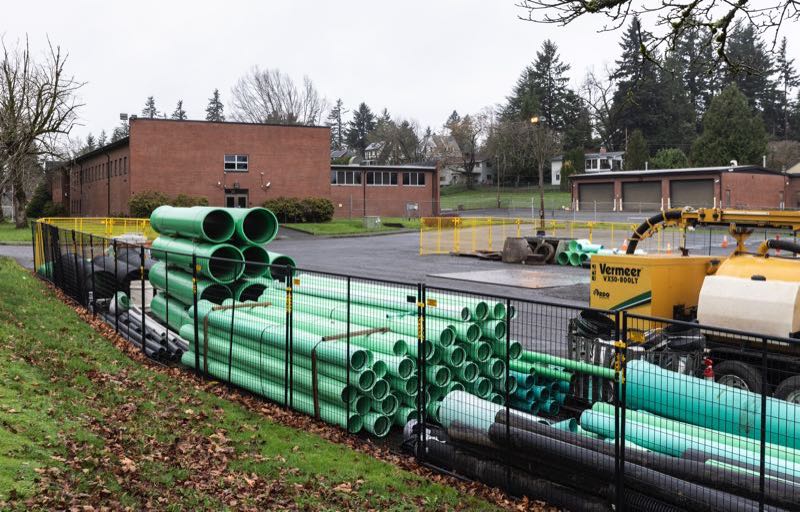 The US Department of Defense donated the excess property to the City of Portland in 2012. The act requires it to be used “primarily for the purpose of providing emergency management services.” Portland City Commissioner Dan Ryan has proposed that the parking lot be used as one of six Rest and Safety Villages to house and provide services to the homeless.

Officials from the Federal General Service Administration and the City of Portland told the Portland Tribune that FEMA is currently reviewing the proposal to determine whether it complies with the restriction in the act. Ryan argues that housing the homeless is emergency management because city council has declared a housing emergency.

“The GSA monitors state or local public agencies for compliance with restrictions on deeds on property transferred by the US government for emergency management purposes and, if necessary, seeks to remedy any issues of non-compliance,” a writes Monica Pech, head of the United States General Service Administration branch. in an email of January 4. “However, the Federal Emergency Management Agency (FEMA) is the agency responsible for determining whether the proposed use of the City of Portland is consistent with the emergency management use objectives outlined in the Waiver Deed. of 2012. FEMA is currently reviewing the plan proposed by the City of Portland to determine if the plan is in line with emergency management goals.

Heather Hafer, public information officer for the Portland Office of Finance and Management, said the city was aware of the FEMA review, but no timeline has been announced for its completion .

The facility is officially called Sgt. Jerome F. Sears United States Army Reserve Center and is located at 2730 SW Multnomah Blvd. The Multnomah Neighborhood Association has requested a review of the proposed camp’s Type III conditional use land, as the property is zoned for general use. Hafer said such a review is not necessary because the proposed use is temporary.

â€œUse of the Sears Armory Parking Lot by Safe Rest Village is a temporary use and as such falls under the Temporary Activities chapter of the City Code. The Bureau of Development Services has confirmed that since this will be temporary use, it does not need a conditional use review, public hearing, or public notice. , related to land use regulations, â€Hafer told the Tribune.

The restrictions in the act describe emergency management as including, but not limited to: â€œplanning and supporting emergency operations; risk assessment and mitigation; public awareness, training and education; emergency preparedness and response; decision making and policy planning; first responder training and exercises; logistics management; and recovery and reconstruction.

City officials initially said they would use the property as a staging area for heavy equipment. In January 2011, then-mayor Sam Adams told his neighbors that installing such equipment there would help the western part of Portland recover more quickly from a natural or man-made disaster. , especially if the bridges are compromised.

Yesterday and today, all of the city’s heavy equipment is stored on the east side of the Willamette River.

But this transfer never took place. No significant changes have been made to the building or adjacent parking lot since the first announcement. Since then, the Portland Police Office and Portland Fire & Rescue have held occasional training drills there. The Portland Water Bureau has stored a few trucks there and the Portland Bureau of Transportation is using part of the parking lot as a staging area for the Southwest Capitol Highway Improvement Project, which includes seismic improvements to the road through the village of Multnomah. .

The property was used as a temporary indoor shelter for the homeless between November 2015 and February 2016. Prior to its opening, then-mayor Charlie Hales promised neighbors that it would only be used overnight for six month.

Some neighborhood residents are opposed to Ryan’s proposal due to issues they say arose when the Armory was used as a homeless shelter. Ryan and Safe Rest Village staff are scheduled to appear before the Neighborhood Association in an online forum at 7 p.m. on Thursday, January 27.

More information on the forum is available on the association’s website.