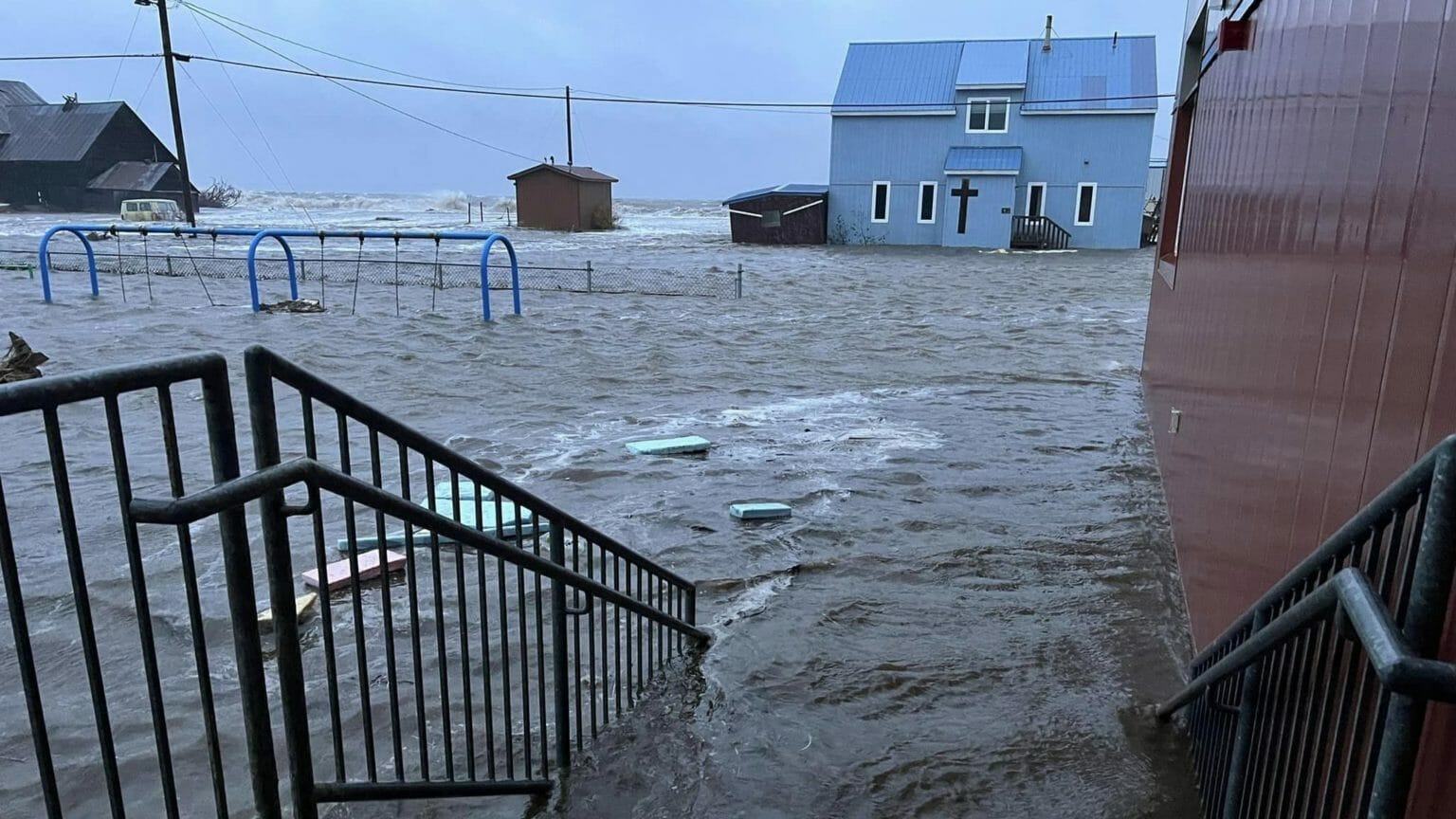 A powerful storm is hitting western Alaska, with reports of major flooding, high winds and widespread damage in many coastal communities.

Governor Mike Dunleavy declared a disaster for the communities impacted by the storm on Saturday morning. In a post on Twitter, he said the state has not yet received any injury reports.

The worst storm in living memory

In Hooper Bay, 110 people were sheltering at school Saturday morning, according to vice-principal Brittany Taraba.

Tribal leader Edgar Tall said at least three houses had left their foundations. He said he had never seen such a storm.

“Not in my entire life,” Tall said. “Some people older than me, because they were children.”

In a video checked in On Friday in Hooper Bay, Judy Bunyon, 63, also said it was the worst storm she had seen since childhood. The video showed water flooding homes and wind ripping roofs off.

In Golovin, Josephine Daniels said she and many other residents were driven from their homes as the waters rose on Friday evening.

“The storm started reaching halfway up the beach around 6 p.m. last night,” Daniels said. “So we moved to school. Then, when we woke up, water covered some of the steps to the school – the school is in the center of the village, downtown.

Late Saturday morning, Daniels said the water had stopped rising. The school and everyone inside appeared to be safe, but the building was “still surrounded by water”.

In Chevak, city administrator Dennis James said the community had lost most of its fishing fleet.

“There are several boats and engines that have sunk and these are our livelihoods – equipment for people’s livelihoods,” he said. “It’s quite devastating to witness something like this.”

More than 15 families had sought emergency shelter overnight. No injuries were reported locally, but a third of the village had lost power due to extensive damage.

“We’re on a bluff, and that’s probably the only saving grace for our community,” James said. “I saw it flooded where it looked like we were on an island, but I had never seen the water that high before.”

In Newtok, part of the town is flooded and dozens of people are staying at school. Joseph John, who works at the town store, said about nine or 10 homes were flooded and the bank eroded 10 to 20 feet overnight.

Erosion has long threatened Newtok. For decades, the community made plans and secured funds to move the entire village to more stable ground.

About a third of the community moved to Mertarvik, a new village site nine river miles upriver from Newtok. The rest of the community is expected to move there in the coming years as new homes are built.

John’s main concern now is how much water will come back at the next high tide.

“It’s the worst we’ve had in years,” John said.

Johnse Ostman, National Weather Service hydrologist said Villages in the Kuskokwim Delta are also seeing flooding, including Napakiak, Oscarville and Napaskiak. In Bethel, Brown’s Slough flooded parts of the east side of town.

He said most communities in the Yukon-Kuskokwim delta should see the water start to recede, but coastal communities can still expect to see strong surf.

But Ostman said people should be careful even when high water recedes. Some places will experience deeper puddles and sinkholes may form under water that appears shallow.

University of Alaska Fairbanks climatologist Rick Thoman said Saturday morning that damage from the storm was both widespread and intense.

“Nome is just coming – the water level there has just risen to 10.3 feet which now makes us the highest water level in Nome since the great storm of 1974,” he said. he declares. “Obviously huge damage to Golovin.”

As water levels continue to rise in the northern Bering Sea on Saturday, Thoman warned that “we are not done” with the storm, with further flooding forecast in Shishmaref and Kotzebue along the Chukchi Sea – and in Nome, as water continues to move east into Norton Du Son.

Very rough seas in Nome this morning. Waves and storm surge are entering the community, including along Front Street. Water levels are expected to peak this afternoon. Here is an image of Nome Harbor (courtesy Alaska Ocean Observing System). pic.twitter.com/oX5XZPHIti

Thoman said one of the most striking aspects of the storm, from a climate perspective, was its arrival so early in Alaska’s winter storm season.

“It’s not that such strong storms don’t happen, but they happen later when there are bigger temperature differences in the area,” he said. And that’s partly because it’s the former typhoon Merbok.

Early Saturday afternoon, the National Weather Service said the storm continued to track down the west coast of Alaska and the center of the storm was now over the Diomede Islands in the Bering Strait.

Ostman said this storm was historic in Alaska due to the distance north where Typhoon Merbok developed.

“These tropical cyclones are generally further south,” Ostman said. “This one grew much higher and was able to track further north.”

“All of those ingredients really came together this time to create the unique set of circumstances to maximize the amount of damage,” Brettschneider said. “So not just the strength of the storm, but the track and what we call the fetch, the length of time the winds are blowing in the right direction to push water directly into vulnerable coastal areas.”

Brettschneider said the scale of the affected region is enormous. And the storm slowed as it approached Alaska, intensifying the waves of water it chased toward the shore.

“High water will be our problem for much of the day,” he said.

Brettschneider said forecasters were able to provide detailed warnings of the storm’s impact in the days leading up to Friday thanks to remarkably accurate computer modeling of Typhoon Merbok’s collapse over the past week.

“It’s really kind of an impressive display of computing power that he was able to get the strength, intensity, direction and potential impacts days in advance,” he said. “In this case, you know, the storm is exactly where we thought it was going to be several days ago.”

This is a developing story. Check back for updates.

Editor’s note: If you live in a community impacted by the historic storm, we’d love to hear from you. If you would like to speak to a reporter, please contact: [email protected] or 907-550-8444. Thanks.