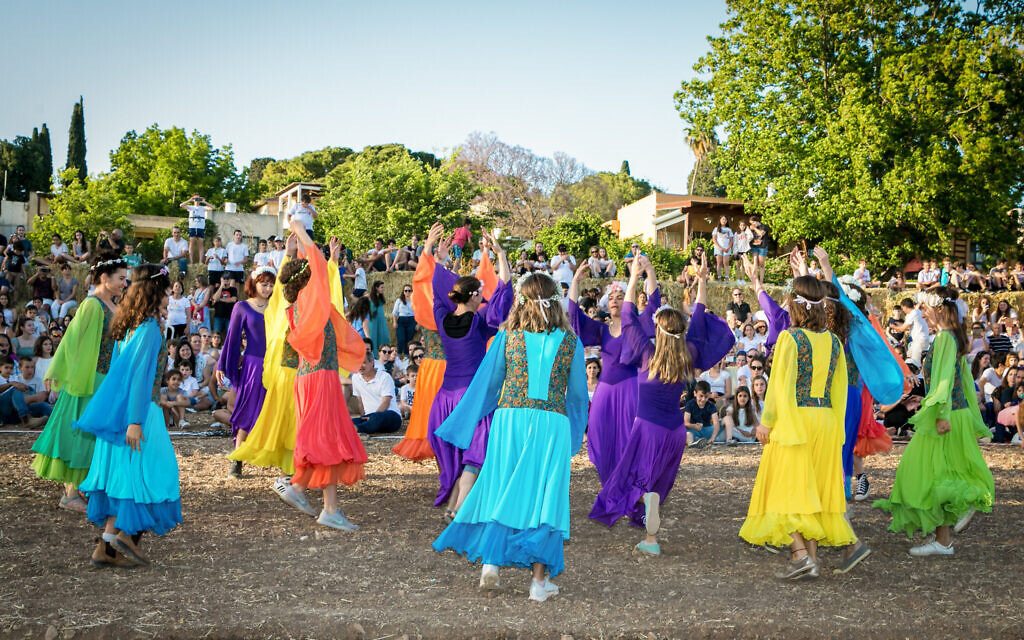 In the kibbutz, Shavuot is an opportunity to remember the glory days of the movement

KIBBUTZ GINEGAR, Israel (JTA) — As the song “Golden Youth” by Kibbutz folk band Gevatron played in an outdoor alcove below the community center in this farming village on Wednesday afternoon, choreographer Tamar Danin, 15, kindly instructed his charges — a dozen girls, ages 9-13 — on the stretches and tambourine tapping they will do during a performance on Saturday night to open the Shavuot holiday.

The dance will be one of eight performed by various age groups, including parents with their babies, at a cultural event expected to attract 500 people.

Audiences will sit outside and gaze south across the vast Jezreel Valley, dubbed Israel’s breadbasket for its many kibbutz and moshav communities, including some of the oldest in the country. Ginegar, which moved to this fertile region 100 years ago, produces grapefruits, tangerines, olives, cotton, corn, wheat, barley, sorghum, tomatoes, watermelons and avocados .

Shavuot, a biblical holiday celebrating the first fruits and grains of the spring harvest, is the most widely celebrated holiday on communal farms in Israel, the vast majority of which are not religiously oriented.

On Shavuot, “kibbutz identity, especially Jewish identity, is strengthened,” said Ayelet Glass, director of the Kibbutz Movement’s society and community department and a resident of Kibbutz Palmachim, along the Mediterranean Sea.

The holiday resonates deeply despite the economic and social crises that rocked the kibbutz movement in the 1980s and 1990s and brought about sweeping changes, such as privatization. A movement based on collective principles began to allow people to retain their outside income; closed communal dining halls, child-rearing and foreign volunteer programs; and welcomed outsiders to build houses on the land without becoming members.

About 190,000 people – including only 63,000 kibbutz members – now reside in the 248 farming villages, said Roi Shabtai, spokesman for the kibbutz movement, which represents 230 of the communities.

Israelis seen during a celebration of the Jewish holiday of Shavuot at Moshav Kfar Yedidia on June 9, 2019. (Flash90)

Elsewhere in Israel, observant families tune into the celebration of the Feast of Giving the Torah at Mount Sinai by learning religious texts throughout the night. Traditional and even secular families gather for dairy meals of lasagna, cheese blintz and cheesecake, a nod to the ancient Israelites’ abstinence from meat after receiving the Torah.

Danin, the choreographer, said her friends travel here every Shavuot out of a desire to see a performance absent from their towns and villages.

“They think it’s just a dairy and cheese party,” she said. “They are looking for something different to do.”

While Ginegar’s one-hour event stays fairly consistent from year to year, new elements keep it fresh. This Shavuot will include a concert stage and a square lined with kiosks selling homemade food, fresh juices and snacks. The establishment of the street fair aims to encourage socialization between veteran residents, non-member residents and visitors to the area and beyond. Light aircraft normally used for field fumigation will be used for sky writing and aerial stunts.

Israelis seen during a celebration of the Jewish holiday of Shavuot at Kibbutz Sarid in Emek Yizrael on June 8, 2019. (Anat Hermony/Flash90)

Several of the additions were introduced by Shimrit Gershon, Ginegar’s cultural coordinator. Gershon moved here with her husband and children 13 years ago and built a house in a new neighborhood dubbed The Expanse — a nickname also used in other kibbutzim — where nonmembers live. Their houses tend to stand out from the smaller, older buildings of the kibbutz.

While some outsiders, including her neighbors, enjoy the pastoral setting but don’t participate in the communal — some say islander — life of the kibbutz, Gershon says she preferred to invest in the community.

“I wanted to fit in, to belong. It’s good to feel connected to something, and it’s fun to meet people of different ages, types and characters,” she said.

Of the Shavuot event, which she also attended last year, Orr Gershon said, “I like the atmosphere, the people, the terrain” and the white suit with a pink sash that she will be wearing.

Nonmembers like Gershon offer hope for preserving kibbutzim as cohesive communities, if not socialist enclaves. The same goes for young people who grew up there and moved to urban areas after their military service, but who are increasingly drawn to a nurturing environment in which to raise their families.

Both groups will be vital in replenishing an aging population and infusing new energy.

Israelis seen during a celebration of the Jewish holiday of Shavuot at Moshav Kfar Yedidia on June 9, 2019. (Flash90)

Even newer terminology indicates a more welcoming attitude, such as the “members with economic autonomy” category for residents of The Expanse.

Maria Sela, 49, who immigrated from Sweden in 1993 and became a full member through her husband, Oded, from Ginegar, estimates fewer than 150 of the kibbutz’s 800 residents are members. Eighty percent of the 150, she said, are over 70.

“The Expanse has made a huge difference,” Sela said of the neighborhood’s 300 residents. Other kibbutz residents include students and women doing community service instead of military conscription.

Some of the veteran kibbutzniks remain very vibrant.

Dan Eick had just wrapped up an adults-only Shavuot rehearsal on Wednesday night that included people between the ages of 40 and 70. The half-hour rally took place on the kibbutz’s outdoor basketball court. This is where Shavuot rallies were held until they outgrew the site in recent years and moved to the grounds.

Ginegar has seen communal celebrations come and go. Jerusalem Day events have run out of steam, and Gershon expects commemorations of Yitzhak Rabin’s assassination to end soon as well. Even Passover gatherings were scrapped, but they have returned, with this year’s Seder drawing 300 people.

Shavuot celebrations are going nowhere, Eick thinks. A retired accountant, he was born in Ginegar and has lived only here, but his three sons and eight grandchildren reside elsewhere. All will go to the kibbutz for the holidays.

Eick, 75, expects his younger sons to do what they always do: playfully push their older brother, Ido, 49, to come home and live.

“They want him to replace us when our souls return to the Creator to preserve their connection to the kibbutz so they can continue to visit,” Eick said.

He considers a question of whether Ido is likely to comply.