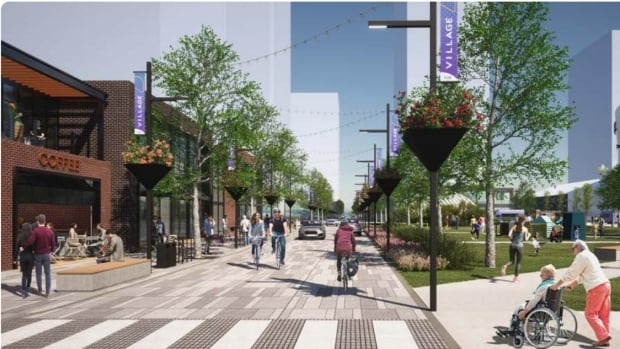 A prime, mostly vacant lot in central Edmonton is set to come back to life, if the city approves a proposal by the Katz Group to turn it into an urban village.

The Katz Group wants to turn nearly 5.3 hectares of land north of Rogers Place into a mixed-use development called Village at Ice Districtconsisting of commercial, retail, industrial and up to 2,500 residential units.

The city is reviewing the application, which Stantec submitted on behalf of Katz Group Real Estate in March. The request received the green light from the Edmonton design committee.

The land is in Central McDougall, stretching from 106th Avenue to 105th Avenue and from 101st Street to 104th Street.

Warren Champion, vice president of the Central McDougall Community League and a longtime resident of the area, is familiar with the proposal and said the development is long overdue.

“It’s density made with a plan,” he said. “It’s not crowded, it’s a real community there and I’m very interested in the interface with the street and the kind of architecture they’re going to use.”

The proposal includes high-rise buildings associated with mid-rise buildings. A rooftop park and amenity space for the people who live there are proposed for the mid-rise summit space, Champion said in an interview with CBC News on Thursday.

“People at the skyscraper are looking down on it,” Champion said. “It’s probably a lot closer to Vancouver architecture than Edmonton architecture.”

Champion has worked with architects over the years and contributed to the redevelopment plan for the Queen Mary Park and Central McDougall area.

The area must be rezoned before the company can build. The city stipulates that skyscrapers must be a maximum height of eight stories near 106th Avenue and up to 25 stories near Rogers Place on 105th.

O-day’min Ward Councilor Anne Stevenson also wants to see something on the ground. Part of the site is parking but the rest is largely unused.

Stevenson, a former city planner, said she looks for three characteristics in a proposed development: density, design and diversity.

The urban village will be a combination of commercial, residential and retail space, as well as park space.

“Design-wise, from what I’ve seen, it’s really open and well connected to the street. I think [it] will bring a lot of activity and life,” Stevenson said.

The village would be adjacent to the MacEwan LRT station, ticking another box in the city’s vision to develop neighborhoods close to transit hubs.

Build and they will come

Champion said his only criticism of the proposal was the focus on commercial and retail uses.

“Edmonton has many businesses, literally all of them downtown,” he said. “Don’t get too business oriented, get oriented to the people who actually live there.”

He said the area needs more residents to support businesses and the Urban Village should aim to achieve this.

“An urban village is anything you can mention: culture, education, schools, jobs, etc.,” Champion said. “The only thing missing are people there. Everything else is there, so that’s what we really need.”

The city is accept comments public online until April 24.

Andrew McLellan, a city planner, said if there were no drastic changes the proposal could go to a public hearing this summer or fall.

The construction of the Village at Ice is expected to take several years.

Big week of meetings in the Village | Vizcaya key