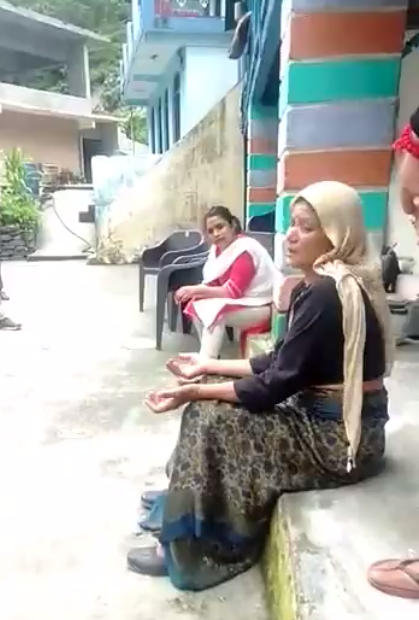 By Vidya Bhushan Rawat*
In the border district of Chamoli in Uttarakhand, a powerful action by Mandodari Devi to protect its grasslands and pastures has surely revived memories of the Chipko resistance. Mandodari Devi fought with CISF jawans who tried to stop her from accessing Helang village charagah or so called common property resource and snatched the fodder she had gathered in the pasture.
The policewomen grabbed her, put her in the police vehicle with her sister-in-law and her daughter-in-law. Her four-year-old grandson was also detained with her and taken to Joshimath, about eight kilometers from their village, where they were made to sit for nearly six hours without food or water and released after being sentenced to a fine of Rs 250 for their encroachment.
The battle for Mandodari Devi remains unending despite initial successes of the government recognizing its ‘right of access to the forest and its products’, but it has inflamed the spirits of people in the state against the misuse of resources natural resources in the name of ‘development’.
It also reflects the grim reality of the highly recognized Chipko movement, which was hailed as environmental protection, but the fact is that it was a “right to resources” movement. The result of Chipko’s ‘success’ was that people lost their ‘traditional’ and ‘natural’ rights to forests.
The story of Mandodari Devi is a reflection of the belief that where people cultivate forests or grasslands, the latter feed them and their livestock. It is the mutual relationship of nature and human being, which is complementary, but is now under threat from those who are ‘facilitated’ to bring ‘development’ to the Himalayan state of Uttarakhand.
On July 15, a video went viral on social media showing an old woman with green fodder on her back being arrested by several CISF jawans. They would ask the woman to stop and give them her fodder. The woman, a true pahadi, was not ready to give in to the demands of these officers. Eventually, two female constables grabbed her and put her in the police jeep with her granddaughter, who was about four years old, her sister-in-law and her daughter.
The case was reportedly closed, but the Mandodari Devi fight, backed by local activist Atul Sati, raised the issue in the media, which was forced to give the other side of the story. The administration, as usual, recounted that this woman and her family were trying to encroach on “government land”, where the Tehri Hydro Development Corporation (THDC), a public sector company involved in the development of various other “hydro” projects in Uttarakhand.
The issue raised the feelings of people in the state. They came out forcefully, as it was an attempt to humiliate a local woman by the police and forestry staff. Over the next few days, the district administration gave the impression that the woman and the community to which she belongs, the Ghasiyaris, the traditional collectors of fodder for their cattle, and her family were trying to “grab” their the village common land where THDC planned to create a playground for the villagers.
The district administration used the village pradhan/sarpanch to speak out against Mandodari Devi and her family for trying to disrupt ‘development’ work in Helang village. It was rather shocking, as a small incident led the entire administration to defame a local woman, who is a widow and who was actually protecting the common property resources of her village.
The incident outraged the people of Uttarakhand and social activists, intellectuals and other civil society organizations and individuals joined together to participate in a ‘Helang Chalo’ appeal on July 24 in support of the Ghasiyaris. This led many district administration officers to visit Mandodari Devi’s house and appreciate his concern for forest conservation.
Chamoli district is India’s border district with China and most of the communities engaged in seasonal migration here are tribal. Until 1964, the border community had frequent interactions with their Tibetan counterparts as trade was open. The tribal community protected and maintained the forest and forest products.

The government decree of January 27, 2014 asked district officials to ensure against the use of pastures for purposes other than grazing.

After the 1964 war with China, the biggest shock that happened was the closing of the border. Many villages were moved elsewhere and trade with Tibet was completely stopped. The government focused on building better road networks to enable the army to develop its infrastructure in the border area, which resulted in land acquisition.
The crisis in Uttarakhand is that there is very little agricultural land as most hill districts like Chamoli, Rudraprayag, Uttarkashi, Tehari, Pauri in Garhwal division as well as Pithauragarh, Bageshwar, Nainital, Champavat in Kumaon area have more forest land, which often created trouble with people.
These districts are located in forest areas and as a result, people’s lives have become difficult because the forest bureaucracy does not allow local people, who used to protect the forests, to access the forests where they live, but do not raise any objection where massive areas are encroached upon or given for ‘development’ purposes to private or public sector undertakings.

The struggle of Mandodari Devi and Chipko

Mandodari Devi and her family resisted THDC’s attempt to take over her village’s only pasture. This was in clear violation of the government order of January 27, 2014, signed by Revenue Commissioner and PS Secretary Jangpangi directing all district magistrates and revenue officers to ensure that the use or transfer grazing or gauchar for purposes other than grazing was declared invalid by the Supreme Court.
Mandodari Devi wrote a letter to the authorities to protect the “charagah” or pastures of his village. The idea was raised that no other “villagers” were with her and that she was the only family trying to create an obstacle to the “development” of the villages where the company wanted to create a playground for children . However, Mandodari Devi argued that it is his family alone who herds cattle, as most of the other villagers have migrated and do not herd cattle. Thus, his concern was to protect the meadows intended for the village.
The incident brought back memories of the Chipko movement, which claimed to protect “the environment” and preserve the “green”. However, he ignored the vital issue of local communities. Most of its leaders, who became famous, were in fact not tribal but belonged to privileged communities who appropriated the struggle and the popular success of the movement and negotiated with the state on behalf of the “people” and spoke to the same person who thought it was a “regional” problem.

The political leadership, cunning and cunning, converted its “defeat” into victory. The historic struggle of Gaura Devi and other powerful women from the Dhauli Valley tribal communities in and around the village of Raini is not even remembered today. The then Chief Minister of Uttar Pradesh, HN Bahuguna, himself from Uttarakhand, at one point called Chipko a “manifestation of narrow regionalism” because the Himalayas belonged to the whole country and not just a few villages in Uttarakhand.
Bahuguna’s opposition to the Chipko movement was well known, but he was a cunning politician, adept at crushing opponents. In December 1973, he called a meeting with Chipko leaders such as Sundar Lal Bahuguna, Chandi Prasad Bhatt, Devaki Nandan Pandey and Jangi Lal Shah Bandhu. There was no representation of the tribes that had built the movement.
A new forest policy was launched in Uttar Pradesh, which entrusted forest management to the Uttar Pradesh Van Nigam (Forest Corporation), and in the name of environmental protection, local communities were denied their rights over resources, while corporations continued to exploit the forests.
The crisis we face today has a direct relation to the glamorization of the ‘Chipko’ movement which has left locals isolated while a few others have earned their name and fame at the expense of communities. It is a crisis when environmental issues are discussed exclusively as an ‘expert’ area, leaving communities completely left out of the debates and discussions.
Last winter, when I traveled to Dhauli Valley and visited Raini and Lata villages and met various people, I realized what exactly ‘Chipko’ brought to the communities. I was shocked to hear former Gram Sabha village chief Raini Chak Lata and prominent member of the Chipko movement Dhan Singh Rana now making a harsh criticism of it.
I could feel his deep sense of anguish and pain. Dhan Singh is deeply distressed and pained by the double talk and duplicity of those who make “decisions” about them without any involvement from the local people. “Mera chulhe jalane se Himalay pighlega nahi,” he said. (Himalaya won’t melt just because I’m cooking on a chulha or stove).
The Dhauli Ganga-Rishi Ganga tragedy is becoming ours, he says. How can the glacier explode when it’s cold, he asks? The moment when the water freezes all over the mountains as it becomes snowy then what is the reason for a glacial burst. Somewhere we heated it. When our water freezes in our pots, how is it possible that a glacial breakout after all that happens in the summer? All of this is our doing.
The widespread public condemnation of the police action against Mandodari Devi and others in Helang has sent a warning to the state government to really look into the issues of natural resources, forests and water in close collaboration with the natives of Uttarakhand.
Already, there is huge resentment against government land policies which have removed the land cap in many areas, especially in the Tarai region. The amended land laws help foreigners buy land in the best locations. The Helang incident showed how laws are used to criminalize local communities regardless of people’s feelings.
If the political class, including the ruling party, truly wants to honor the sentiments of Uttarakhand, they must protect the Pahadi identity, which includes protecting, preserving and respecting the Himalayas, its various forests, of its biodiversity and its beautiful rivers because they are our civilisation. and without them we cannot imagine Uttarakhand.
—
* Human rights defender