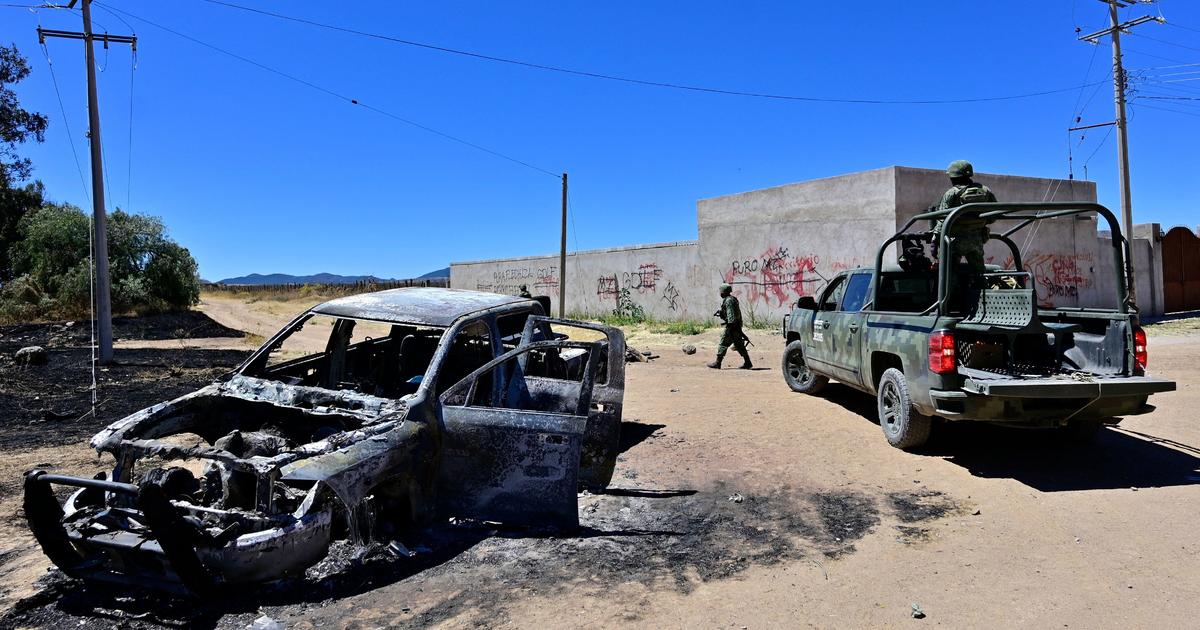 Mexico village a ghost town after murders and cartel warning: ‘Either you go or you die’

Escorted by heavily armed soldiers, a Mexican farmer returns to his ransacked ranch near the front line of a war between drug cartels, whose acronyms are scrawled on the bullet-riddled walls.

Recently taken over by the security forces, Palmas Altas, in the state of Zacatecas, in the north of the country, is now a ghost town, with the exception of a few well-fed dogs who walk around under a blazing sun.

A burnt-out van is left abandoned at the entrance to the village, located on an arid plateau at the foot of the mountains.

A graffiti signed “CJNG” warns that the area is under the control of the Jalisco New Generation Cartel, whose leader Nemesio “El Mencho” Oseguera is one of America’s most wanted fugitives, with a $10 million bounty on his head.

“He’s the number one priority of the DEA and frankly federal law enforcement in the United States,” said DEA Agent Matthew Donahue. told CBS News in 2019.

The Ministry of Justice considered the Jalisco Cartel as “one of the five most dangerous transnational criminal organizations in the world”.

On a nearby wall, the acronym “CJNG” has been crossed out in black paint to make way for the letters “CDS” – imprisoned drug lord Joaquin “El Chapo” Guzman of the Sinaloa Cartel.

Since 2020, the two cartels have been squabbling Palmas Altas and Zacatecas – whose main city is a colonial center known for its Baroque-style architecture – over the state’s drug trafficking routes to the United States, as well as ports. on the Pacific and the Gulf. from the coasts of Mexico.

“Either you go or you die”

Life in the town took a violent turn last February, said Miguel, a farmer in his 40s whose name AFP changed to protect his identity.

“They started kidnapping and beating people. They killed a man and his son. Fear made us leave,” he says.

A year later, there were only five families left.

Then came a chilling warning: “Either you go or you’ll die.”

The message was heard loud and clear: the village has been completely deserted since February.

Miguel took refuge in Jerez, 20 kilometers away. Thanks to the deployment of the security forces, he hopes to be able to prune his fruit trees.

A total of 2,000 people have been displaced in the area, according to authorities.

“We want them to come home,” Jerez Security Secretary Marco Vargas said at his office in the town, which attracts tourists with its cobbled streets and ornate churches.

“We will maintain law enforcement to prevent possible incursions or a return of organized crime,” he adds.

That’s little comfort for Nancy Reyes, whose son disappeared in mid-2021 on his way to his fiance.

“Nobody is helping us,” Reyes said.

The teenager is among more than 95,000 people missing in Mexico.

The uncertainty is a “continuous torture” for the families, explains Ricardo Bermeo Padilla, representative of a group to search for missing persons.

“People Who Do Evil”

Insecurity is nothing new for Zacatecas, which was a battleground between the Gulf Cartel and the ultra-violent Los Zetas in the 2010s.

Since the Jalisco and Sinaloa cartels arrived to fight for control, violence has been a daily occurrence.

In January, 10 bodies were found in an abandoned sport utility vehicle in front of the Governor’s Palace in the historic center of Zacatecas.

President Andres Manuel Lopez Obrador called the dumping of bodies in such a public place a “provocation”.

In his red stone cathedral with a finely carved facade, the bishop of Zacatecas, Sigifredo Noriega Barcelo, confides after the Sunday sermon that he would like to speak with “people who do evil”.

But, he adds, “unfortunately, there are no interlocutors. There are many groups, which divide and subdivide”.

In the ultra-secure city center, Mexican tourists take the cable car to a lookout point to view Zacatecas, whose historic heart is a UNESCO World Heritage Site.

In the evening, lovers kiss, while a clown makes hundreds of children laugh on the steps next to the cathedral.

There’s more to Zacatecas than cartel warfare, says Rosita Franco, director of the Guadalupe Museum, inviting visitors to return for a Baroque festival in September.

Even Spain’s King Felipe VI lingered admiring the library’s extensive 16th- to 19th-century collection and galleries during a 2015 visit with Queen Letizia, she recalls.

Franco prefers not to talk about the violence that strikes as far as Guadalupe, on the outskirts of the city of Zacatecas.

“We believe in the culture of peace. We believe that art changes lives and that art and culture are human rights,” she says.