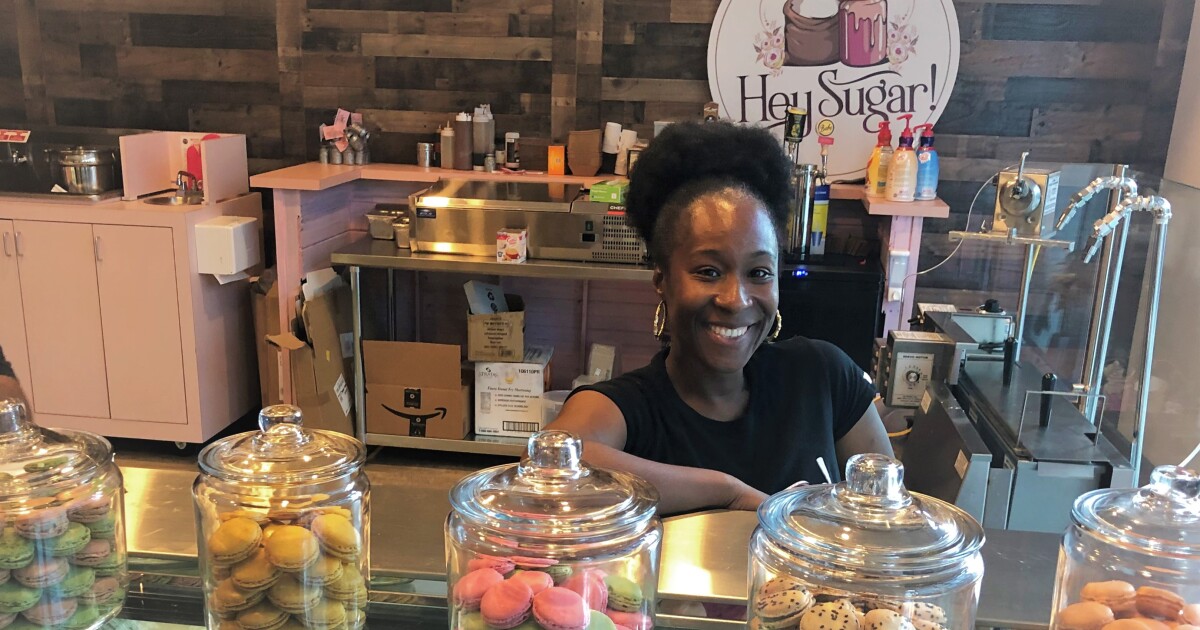 Chan Buie was born and raised in Los Angeles, but spent her childhood summers in northern Mississippi, where she indulged in rich Southern desserts like peach cobbler and banana pudding, as well as Red Velvet, Coconut Pineapple, and Sock it to Me Cakes.

After retiring from a 20-year career in the Navy two years ago, the downtown San Diego resident launched the second phase of her working life. She’s now a founder and full-time baker for her Southern-inspired Hey Sugar! dessert shop, now in its soft opening phase near Petco Park in East Village.

Buie makes everything from scratch in a Barrio Logan commercial kitchen and prides herself on using top quality ingredients and large portions. Prices start at $2.50, with most items between $4 and $5. To ensure freshness, anything not sold on the day it is cooked is placed on the specials shelf at deeply discounted prices.

Since the store’s soft-opening in June, Buie said business has increased week by week. Its best-selling items so far are its peach cobblers, lemon bars, cheesecakes, and jar cakes (layers of cake and parfait-style frosting in a canned jar). She plans to extend opening hours as business and staff grow, and she plans a grand opening on September 17.

Buie learned the basics of cooking from her father, but discovered her passion for the culinary arts at age 16, when her high school home economics teacher began taking her to restaurant kitchens in Los Angeles. . She said these restaurant trips were an eye opener because she had never seen blueberries or fresh grass before, having grown up in the food desert of the South Central LA housing projects.

In April 2000, she joined the Navy and moved to San Diego, but her work as a counselor required frequent deployments to places like Abu Dhabi and Bahrain, where she counseled service members struggling with their jobs and being away from home. them. She also had her own health issues and retired for medical disability in September 2020.

Whenever she was home in San Diego between deployments, Buie cooked and baked for friends, who encouraged her to start her own craft business. In 2009, she launched Mama Chan’s Kitchen, where she served home-cooked meals from the trunk of her car and prepared Sunday take-out for the after-church crowd. In 2013, she decided to focus all her energy on desserts and changed the name of her company to Hey Sugar!

For the past nine years, she’s sold her desserts online, at pop-up events and street fairs like the East Village Night Market. Although customers begged her for many years to open her own boutique, she resisted.

“I didn’t want it,” she said. “I come from residential estates. I wasn’t exposed to business owners when I was young, so I didn’t see myself as an entrepreneur. But one night I dreamed that I was sitting in a pink cafe and realized when I woke up it was my own cafe, so I decided it was a sign to open my own. company. In the Navy, we don’t believe in the word “no”. We always find a workaround, so I was determined to make it happen.

Her new boutique — on the ground floor of the Park 12 apartment complex near Imperial Avenue — has the pink walls Buie dreamed of. It also has an original mural designed by artist Daryl Shawn with images of Buie’s inspiration, Maya Angelou, and words from two of Angelou’s most famous poems, “Still I Rise” and “Phenomenal Woman “.

The shop also has a shelf full of board games for customers to play when they visit. She plans to open an upstairs lounge soon where people can relax with their sweets and glasses of nitro cold brew coffee and kombucha that she has on tap.

“My goal is to create this nice and warm family atmosphere in the middle of the city,” she said. “I want it to be a family place where people can come in with their kids, play games and take time for themselves.”

When: 4 p.m. to 8 p.m. from Tuesday to Saturday. Hours will expand in the coming weeks.