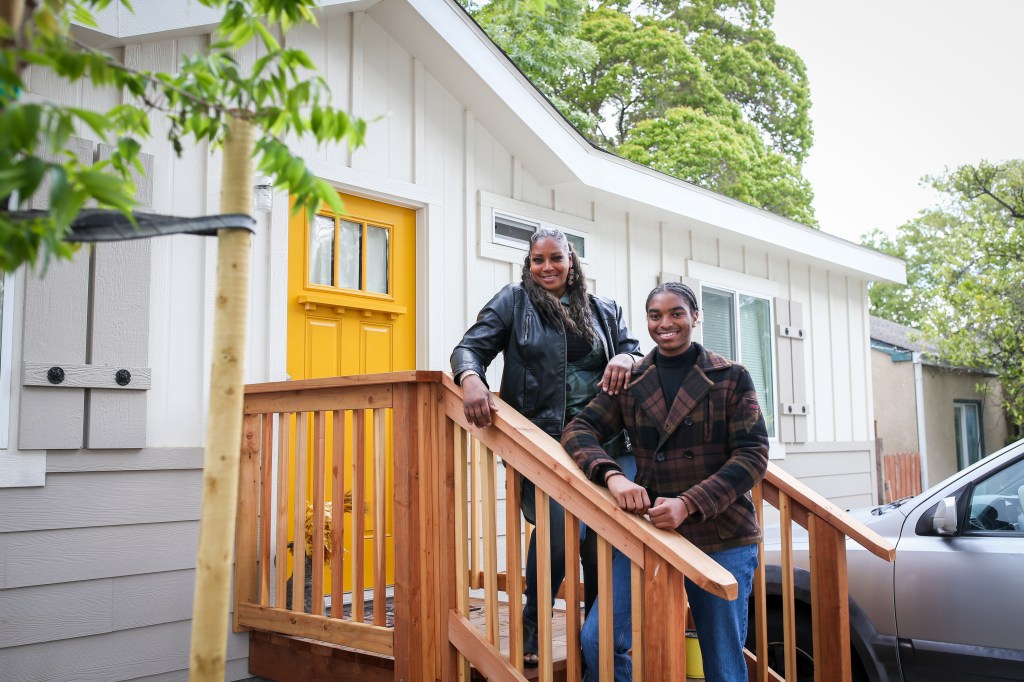 Six families at risk of homelessness are resting a little more now after moving into their new affordable rental homes in Pittsburgh.

The families, all led by single mothers with full-time jobs, were chosen as the first residents of the new building Gonsalves Village, a small community of affordable single-family homes unveiled earlier this month in North Pittsburg.

One of them was Jasmine Strange, a local school PE teacher and author, who previously shared a small room she rented for $950 a month with her teenage son. Her college daughter slept on the floor when she visited.

“God put me on this Earth for a reason, and I would love to stand up for the women who will live here,” Strange said at the recent unveiling, noting that she was initially shy about sharing her story. “We are so grateful, so grateful.”

Named after major contributor Steve Gonsalves, the privately funded community is the work of yellow roof foundation, a charity founded by Dave and Lori Sanson, owners of DeNova Homes of Concord. They started the nonprofit four years ago to help “hard-working families going through difficult times due to circumstances beyond their control”, they said.

Residents of the village of Gonsalves were all referred to the nonprofit, primarily by the local school district, Lori Sanson said. Some had fled abusive relationships or difficult life situations; others had moved from various short-term rentals, motels or couch surfed with friends, unable to pay high Bay Area rents despite full-time jobs as caregivers, home health care providers and administrative and sales and security employees.

Statistics show that most low-income households in California spend about 50% of their income on housing, making it difficult to pay for other essentials, such as food, transportation, utilities and insurance.

These are burdens that Lori Sanson and her husband don’t think hard-working families should bear, she said. And, after working with HomeAid, a nonprofit transitional housing provider, the two were inspired to start their own foundation, helping to provide low-cost rental housing to working families.

They worked with Pittsburg to purchase excess land where they could build the village – three small houses and three secondary suites – while volunteers helped furnish them.

Privately funded, the Yellow Roof Foundation guarantees that no resident will pay more than 30% of their income in any of its income-based affordable communities, with initial plans to locate other such communities in Oakley, Antioch, Clayton and Solano County. In Gonsalves Village, that means renters in the new one- and two-bedroom homes and ADUs, which are between 450 and 800 square feet, will pay $660 to $850 a month.

Those rents are much lower than what tenants typically pay for moderate- and low-income affordable housing, Lori Sanson said, noting that many so-called affordable units are still too expensive for many. She and her husband Dave hope the yellow roof formula will resonate with other like-minded people to bring more affordable rental housing to market, she added.

“We learned through that experience that there was this missing link there, families and individuals who work full time or go to school or whatever, but just because of circumstances, either in their lives, or just housing costs here in the Bay Area, are struggling every day,” she said.

Such was the case for Strange, who moved from place to place paying up to $1,550 in rent as she tried to maintain a home for her two children and pay for their schooling and income. other expenses. The 48-year-old single mother has never worked, having coached women’s basketball, police, educator and other jobs over the years and is now seeking her full general education qualification.

Strange said she takes it one day at a time and won’t cut costs for her talented children: her daughter Lyric is a music student at Howard University, while her son Cadence, a musician and award-winning classical singer, takes BART every day to San Francisco so he can attend the Academy of Thought and Industry, a private Montessori-inspired high school.

“Once I had my kids, it all turned into trying to get my kids through school (and extracurriculars),” Strange said, noting that she always wanted to make sure that ‘she could nurture their talents, even if it meant cutting back elsewhere.

Although initially embarrassed to receive help, Strange said she now realizes that as a teacher she can help educate others about homelessness.

“The hardest part is that homelessness has so many faces,” she said. “I have to come out of my shell because I don’t want to be embarrassed forever. … That’s what it looks like, because it can happen to anyone overnight.

Strange and his son moved into their new two-bedroom home a few weeks ago, and they still can’t believe how wonderful it is, she said. When they opened the non-profit brand’s yellow door and discovered the fully furnished unit that was also fully stocked with food, it seemed unreal, she said.

“I’m trying to get used to it because it’s such a blessing,” Strange said. “It’s really hard to conceive, other than the fact that I’m in it. Nobody would ever believe something like that.

“Yellow roofs build more than just houses,” she added. “They build people. They give us back our dignity. And it’s just priceless.

Players can liberate or loot villages in Dune.