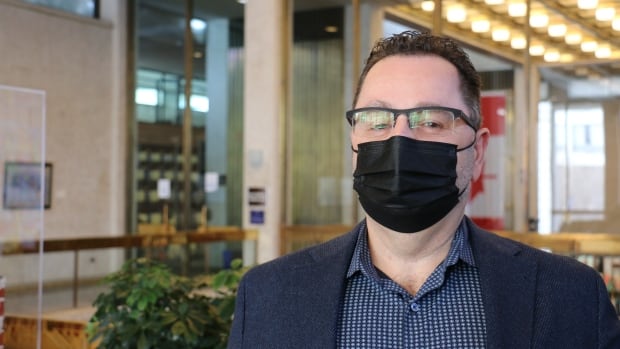 A historic building in Winnipeg’s Osborne Village neighborhood could lose its heritage status as it is in the process of collapsing.

John C. Falls House at 36 Roslyn Road is on the city’s historic resource list, to prevent demolition and preserve the architecture as much as possible. The brick building was once the home of Winnipeg businessman John Claire Falls.

Jerry Cianflone, owner of the Pizza Hotline chain, bought the house in August 2021, understanding that it would need some updating.

“I wasn’t afraid of it, though, because like I said, I did other projects,” he said. “I thought it shouldn’t be that bad. But unfortunately it wasn’t.”

He said he wanted to set up his office there and rent space to other tenants. But when he started renovating, he realized the building was in worse shape than he had imagined.

Now he’s asking the city council to remove the building’s heritage status so he can tear it down and build something new.

“It’s my first with a historic building, so I’m going to be sensitive,” he said in an interview.

“I just want to bring in the experts who have done this before because I don’t want to step on anyone’s toes. I want to respect the past and build something beautiful.”

Cianflone ​​said he was not sure what he would build, but any new projects would have to be approved under the town’s Osborne Village Secondary Plan.

Building on the brink of collapse

The committee heard that the ground beneath the building was shifting and its stone foundations were in such poor condition that the brick walls and supports had begun to shift. The brick layers are also not fastened together, allowing the bricks to separate from the structure.

Cianflone ​​consultants told the committee the house was on the verge of collapse and existing tenants had six months to vacate.

To preserve the integrity of the house, Cianflone ​​said it would cost $3.1 million to dismantle the house, replace the foundations and rebuild it – a cost that is not feasible for him, he said. he declares.

If he were to take the building off the list, Cianflone ​​said he would reuse whatever he could, mainly the remaining bricks and wooden joists.

He told the city’s property committee that he was going to have the house inspected and have consultants look at the house before he bought it, but the housing market was so hot the realtor said that he would lose the case if he didn’t accept as soon as possible.

Heritage Winnipeg has taken a rare stance on this by supporting delisting.

“It’s heartbreaking today to do this.”

Tugwell told the committee that she was working with Cianflone. She even visited the building to see it for herself, calling the previous owner’s lack of maintenance “appalling”.

Her decision to support delisting, Tugwell said, was made in part because she believed Cianflone ​​wanted to be part of the process to salvage as much of the original building as possible and build something that would fit in.

“I think the owner went above and beyond. It’s rare that he’s willing to work with us,” Tugwell said.

“Transparency and collaboration are very important.”

The committee voted 3 to 1 in favor of delisting the property. Com. Vivian Santos (Point Douglas) was the outlier. She asked several questions about other options and said she needed more time to think about her vote before it went to city council.

The disbarment will appear before the city’s policy executive committee on March 16. Engineers found the building in Osborne Village to be structurally unstable and said it would have to be demolished within the next five years.