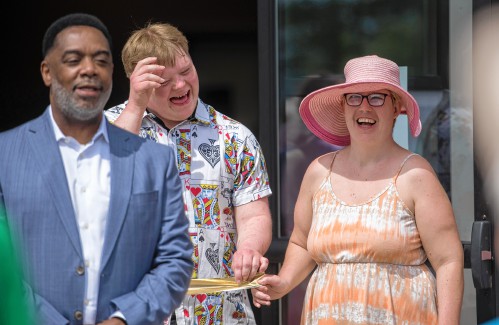 Pathlight celebrates the opening of its new home on Village Hill

NORTHAMPTON — Anyone on the old Hospital Hill on Thursday afternoon would have known something exciting was afoot. Cheers, jubilant shouts and applause echoed through the Village Hill Road car park, where Letitia Ward, 36, summed up the mood.

Ward and dozens of others gathered Thursday for the official opening of the new building housing the Inclusive Community Center. Long based in Hadley, the center is owned by Pathlight – the organization that works with people with intellectual and developmental disabilities and autism, and their families.

The new $3 million building hosts a wide range of Pathlight programs: Family Empowerment, Autism Connections, Milestones, Whole Children and Whole Selves. But for those most familiar with these programs, the building is simply thrilling in itself.

“Boing Boing!” exclaimed Aidan O’Donoghue, 26, showing off a small trampoline in the new ‘big move’ gym. He was also enthusiastic about the cafe, where he listed the possibilities of the new space. “A potluck, that sort of thing.”

O’Donoghue began participating in after-school programs with Whole Children when it opened in 2004. As an adult, he now attends the Milestones day program and led a building tour on Thursday that included a beloved figure of the organization – Mayor Gina -Louise Sciarra, who previously worked as communications manager for Pathlight.

“Come on, little mayor,” O’Donoghue joked as he moved the group between rooms.

Sciarra was on hand for a space tour and ribbon cutting. She described the center’s move to Northampton as “incredibly meaningful to me”.

“Thank you so much for moving here,” she said. “I love my new job, but I miss you every day.”

Today, 320 people in the four western counties of the state are served directly by Pathlight in group homes, apartments and foster homes, while another 2,000 children, teens and adults receive help through programs such as Whole Children, Milestones and Autism Connects. .

Pathlight operates with 520 employees and $32 million in revenue, and also has 165 nursing homes. It is largely funded by the state Department of Developmental Services.

The location of the new building has a strong meaning. It stands on the site of the old gatehouse that led to Northampton State Hospital, where people with intellectual or developmental disabilities were held in poor conditions away from their families.

Carrie McGee, who is director of Whole Children, Milestones and Whole Selves, referenced the site’s history. She said she was honored by the movement that has led to a more human present, adding that those gathered will continue to “work towards true, honest and respectful inclusion”.

“It’s an exciting time for us here,” Pathlight executive director John Roberson told those gathered Thursday. “It took a lot of effort to make this day possible.”

This excitement was evident as the groups toured the building. In one room, drums, guitars, keyboards and other band equipment were ready to play, with a separate room where a recording studio would be located.

The room will be where The Friendship Band, a group led by three teachers, will play. Eddy Hougen, program specialist at Pathlight, said people can often express themselves or say things through singing that they otherwise wouldn’t.

“People learn through music because of rhythm and movement,” Hougen said. “But it’s also about expression.”

The new building features many elements designed specifically for Pathlight, with even the smallest details delighting those who will use the space.

“They have a dishwasher, which is a good thing,” Ward said.

Valle Dwight, director of development and communications for Pathlight and mother of O’Donoghue, said the inclusive community center has been in Hadley for more than a decade. But when the organization’s lease arrived, it became clear that owning a building was the next step.

“We wanted to make sure we had a permanent place and set up the way we wanted,” Dwight said. “Owning a building was a dream…

“Being in Northampton is great. We hope to be able to attract families we haven’t had before to this side of the river while still having a home for everyone around the valley.

Dusty Christensen can be contacted at [email protected]