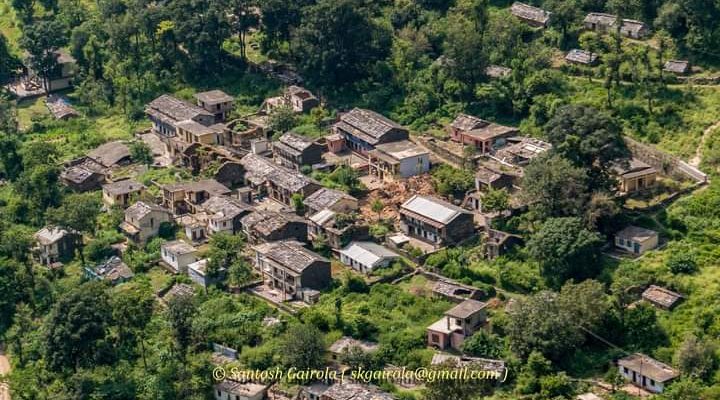 There is an underlying current of devotion, an instinctive sense of the sacred, among us Indians, even today, with all our Western baggage. Maybe it flows with less clutter among those who live in rural areas.

This brings us to the Himalayan village of Haat on the banks of the Alaknanda, established over 1,000 years ago by Adi Shankaracharya himself. Adorned with several temples, the main shrine is that of Laxmi-Narayan, built at that time for pilgrims unable to make the entire journey to Badrinath. The sannyasin brought Bengal priests to settle here and perform worship. Until ten years ago, Sanskrit was taught in the village pathshala. Today, generations of unbroken tradition later, the villagers proudly declare that all land and property in the village actually belongs to Laxmi-Narayan.

However, the living history and heritage that is Haat were doomed to oblivion with the sanction of the Vishnugad-Pipalkoti hydroelectric project funded by the World Bank in 2007. The entire village was marked for involuntary displacement. At the time, left with no choice, attracted by the Rs 10 lakh compensation program and convinced that the project was for the national good, the villagers agreed. An agreement has been established by the construction company (Tehri Hydroelectric Development Corporation Ltd or THDCL) with pradhan and six-seven signatory villages, without any formal gram sabha resolution. The deal let them move out on their own. The company washed its hands of all other responsibility. The village community had no legal aid to help them navigate critical documents and interpret their rights.

Ten years ago, the villagers began to relocate, dispersing to neighboring areas. They haven’t had a normal life since. All community life, common village activities and traditional practices have simply ceased to exist.

Our national rehabilitation policy primarily requires that the displacement of communities be done en masse to ensure social well-being. It demands that the quality of life of those displaced be better than before; it specifies that displacement should only take place as a last resort; and that transparent and fair interaction between the two parties, with appropriate grievance mechanisms, is desirable.

Haat village after the start of construction of the hydroelectric project. Photo: Special arrangement

The unfathomable distance between paper and fact is one that the uneducated and unsuspecting villagers of Haat still map to this day. Haat was a village with an abundant source of natural water flowing directly into their homes, endlessly, for centuries. Today, the two groups of families who have settled in the neighboring regions of Daswana and Eldwana have water pumped by the company, for one hour in the morning and one hour in the evening. This water first passes into storage tanks which would never be cleaned. Their decades-old traditional houses with slate roofs and earthquake-resistant, weather-resistant and aesthetically charming masonry have long been smashed up by the company’s bulldozers; the villagers rebuilt with cement and concrete. These new homes are cold in the winter and hot in the summer, collapsing into flagstones killing people in earthquakes, and ugly to see.

Their temples are locked, with no accommodation for a priest. Around 80 people have obtained temporary employment with the company, of which only 10 are permanent. Their independent livelihoods like masonry, dairy, weaving, and farming were all lost. Today, as they regretfully admit, they depend entirely on the business for their livelihood.

Villagers have protested in recent years and claimed their rights, but the company has effectively quelled any such opposition by forcing every employee to sign an affidavit declaring that neither they nor any member of their family will participate in the protests; if they are found guilty, they risk losing their jobs.

The village has been divided into factions, and general despair reigns. Many have lost faith in justice; others believe that having lost their village, speaking out will only result in the loss of their jobs. Some village workers have also been turned into informants for the company and take mobile recordings and photos of gram sabha meetings, exposing villagers who dare to voice their dissent.

It has also been reported that during any puja or community festival, the company withholds its employees for one reason or another. In their efforts to prevent the village from uniting, the company interfered in the affairs of the village; the self-respect and dignity of the free and generous â€œpahadiâ€ spirit, of a proud and united community, have been destroyed.

Sixteen homes of those who refused compensation were bulldozed one fine morning last month. The fact that the construction of this HEP is still under study at the Supreme Court does not change anything. The protests in the valleys of Uttarkashi, Lakhwar, Tehri, Mandakini in Pancheshwar against the HEP fall on deaf ears. Warnings from scientists, international and here, are also being ignored, despite viable alternatives for electricity available today.

While we were happy to hear the Prime Minister quote the Surya Upanishad in distant Glasgow, in its push for solar power, and more than delighted to hear about ‘harmony with nature’ and ‘infrastructure climate resilient â€, a little home implementation wouldn’t hurt either. Instead of HEPs, we could have villages powered by solar energy, since every Himalayan village faces the sun; the Chardhaam pariyojna which destabilized the steep valleys of the Himalayas could be sized to adapt to the hilly terrain; solar fences for orchards to grow nuts, chestnuts, plums, malt and kiwis could be distributed in villages for green jobs and high income; Rice husking machines that don’t polish the redness of nutrient-rich mountain rice could save hours of hard manual labor done only by women. As one youth pointed out to world leaders, a simple ‘blah, blah’ gets us nowhere.

Electric bulbs cannot illuminate the inner darkness in which a heartless and cultureless existence plunges us. What to do with a progress that impoverishes our souls and our minds? India thrives through little-known gems like Haat. Restoring Haat, helping the villagers to rebuild what has been accidentally and unwittingly lost, is highly achievable and makes it the only sane and honest solution if our words on global platforms are to make sense. In the meantime, make no mistake, destroying without complex and calling it “development” has not fooled neither the planet nor the conscience.

Priyadarshini Patel is a member at the head of Ganga Ahvaan, a citizen forum working for the conservation of the Ganges and the Himalayas.

Light up the village | NC cashiers