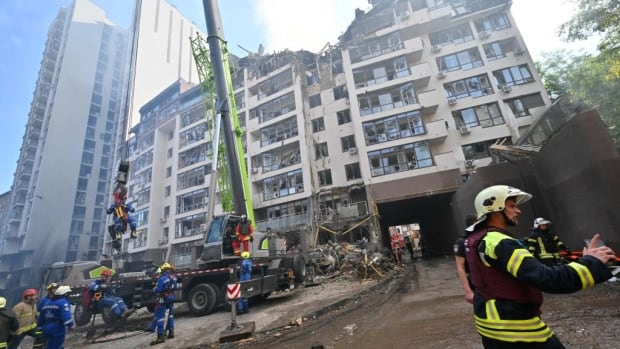 Journalists in Kyiv saw emergency services battling the flames and rescuing civilians. They said the strikes also damaged a nearby kindergarten, where a crater carved out the yard.

Oleksiy Goncharenko, a member of the Ukrainian parliament, wrote on the Telegram messaging app that according to preliminary data, 14 missiles were launched towards the capital region and Kyiv itself, suggesting that some were intercepted.

Klitschko said one of the missile strikes partially destroyed a nine-story building and started a fire.

“There are people under the rubble,” he said on the Telegram app. He said four injured people were hospitalized, including a seven-year-old girl.

Deputy Mayor Mykola Povoroznyk later updated the casualty toll to one person killed and at least six injured and said the missile struck near the site of a similar attack in late April.

Life had returned to normal in Kyiv after fierce resistance that halted Russian advances early in the war, although air raid sirens sounded regularly across the city. There had been no major strikes in Kyiv since early June.

In the central town of Cherkasy, about 200 kilometers southeast of Kyiv, one person was killed and five injured in strikes on Sunday by two Russian rockets, regional governor Ihor Taburets said. Infrastructure was damaged, he said.

Cherkasy has been largely spared from bombardment since Russia invaded Ukraine in late February.

The Russian Defense Ministry said it used high-precision weapons to strike Ukrainian army training centers in Chernihiv, Zhytomyr and Lviv regions, an apparent reference to strikes reported by Ukraine on Saturday. There was no immediate comment on Sunday’s strikes on Kyiv or Cherkassy.

Meanwhile, Russian forces sought to engulf the last remaining Ukrainian stronghold in the eastern Donbas region of Lugansk, pressing their momentum after taking full control on Saturday of the charred ruins of Severodonetsk and the chemical plant where hundreds of Ukrainian soldiers and civilians had been locked up.

On Saturday, Russia also launched dozens of missiles at several areas across the country away from the heart of eastern battles. Some of the missiles were fired by Russian Tu-22 long-range bombers deployed from Belarus for the first time, Ukraine’s air command said.

The bombardment preceded a meeting between Russian President Vladimir Putin and Belarusian President Alexander Lukashenko, during which Putin announced that Russia planned to supply Belarus with the Iskander-M missile system.

Russian Defense Ministry spokesman Igor Konashenkov said late Saturday that separatist forces backed by Russia and Moscow now control Severodonetsk and the villages surrounding it. He said the attempt by Ukrainian forces to turn the Azot plant into a “tenacious center of resistance” had been thwarted.

Serhiy Haidai, the governor of Luhansk province, said Friday that Ukrainian troops were withdrawing from Severodonetsk after weeks of shelling and house-to-house fighting.

He confirmed on Saturday that the town had fallen to Russian and separatist fighters, who he said were now trying to blockade the nearby town of Lysychansk from the south. The city lies across the river just west of Severodonetsk.

Russian news agency Interfax quoted a spokesman for the separatist forces, Andrei Marochko, as saying that Russian troops and separatist fighters had entered Lysychansk and fighting was taking place in the heart of the city. There was no immediate comment on the Ukrainian side’s claim.

Lysychansk and Severodonetsk were the focal point of a Russian offensive aimed at capturing all of Donbass and destroying the Ukrainian army defending it – the most capable and battle-hardened segment of the country’s armed forces.

Capturing Lysychansk would give Russian forces control of every major settlement in the province, an important step towards Russia’s goal of capturing all of Donbass. The Russians and the separatists control about half of Donetsk, the second province of Donbass.

The G7 will ban gold imports

Seeking to put more pressure on Russia, the Group of Seven countries announced a ban on imports of new gold from Russia as they began their summit in the Bavarian Alps in southern Germany on Sunday. .

It is the latest in a series of sanctions the Club of Democracies hopes will further isolate Russia economically following its invasion of Ukraine.

Leaders of the United States, Canada, Britain, France, Germany, Italy and Japan, as well as the European Union, held talks on Sunday to discuss the impact of war on the global economy, including inflation, and on infrastructure.