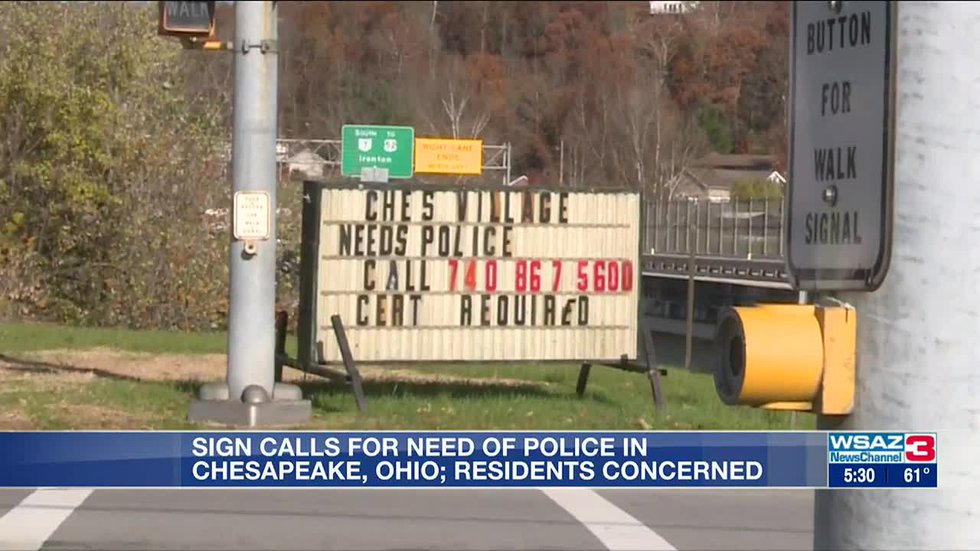 CHESAPEAKE, Ohio (WSAZ) – You can usually see Luann Sniff walking past the sidewalks in Chesapeake, Ohio.

â€œI live right in the middle of Chesapeake,â€ Sniff said.

She has lived in the village for years now and says that although she feels safe there is an urgent need in the community.

In an attempt to try to bring in more officers, the village put up a sign that read “The Village of Chesapeake needs the police … call 740-867-5600 … certification required.”

Runyon, who also lives in the area, saw the sign while crossing the bridge. He says the wording sends the wrong message.

â€œIt just opens the door to trouble. The people of Huntington’s see that and everything and they want to come here and break into people’s houses and vehicles and things. This is what I’m afraid will happen, â€Runyon said.

â€œIt could produce crime in a way, because they see it and they know we don’t have cops, we need cops,â€ Sniff said.

The sign comes after the village of Chesapeake lost the majority of its police force following a council meeting earlier this month. They have only operated with a few officers since then.

Over the phone, City Councilor Paul Hart told WSAZ that the village is not trying to scare anyone with the sign. However, they want to make sure people know the emergency they are facing with the current shortage of officers.

“We have no crime now, but we probably will,” Sniff said. “They should have put it on Facebook.”

While Sniff understands firsthand how necessary the police are, she and Runyon fear the sign will do more harm than good.

Here is the latest news from the Associated Press at 12:40 am EST | Minnesota News