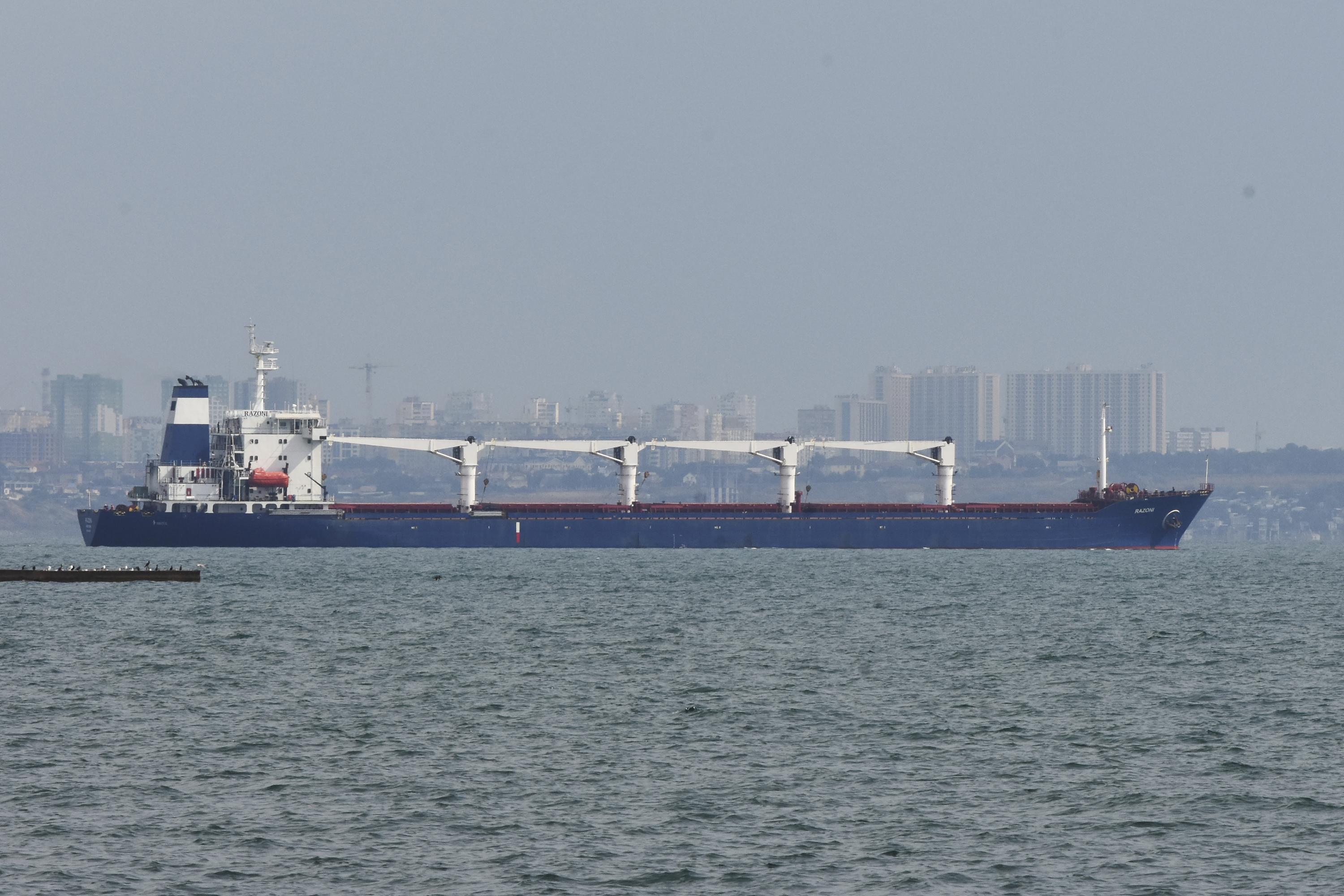 ANKARA, Turkey (AP) – The first ship carrying Ukrainian grain left the port of Odessa on Monday as part of a United Nations-brokered deal with Turkey that is expected to release large quantities of Ukrainian crops to foreign markets and relieve a growing hunger crisis.

The freighter Razoni, flying the flag of Sierra Leone, left Odessa for Lebanon, the Turkish Defense Ministry announced. A United Nations statement said the Razoni was carrying more than 26,000 tonnes of maize.

Data from Razoni’s Automatic Identification System, a vessel safety tracking system at sea, showed the ship slowly pulling out of its berth at the port of Odessa on Monday morning alongside a tugboat.

Ukraine’s Infrastructure Minister Oleksandr Kubrakov tweeted a video of the long freighter sounding its horn as it headed out to sea.

“The first grain ship since Russian aggression has left port,” Kubrakov said on Twitter. “Thanks to the support of all our partner countries and the UN, we have been able to fully implement the agreement signed in Istanbul. It is important for us to be one of the guarantors of food safety.

The ship is expected to reach Istanbul on Tuesday, where it will be inspected, before being allowed to continue, the ministry said.

The corn will then head to Lebanon, a small Middle Eastern country struggling with what the World Bank has described as one of the world’s worst financial crises in more than 150 years. A 2020 explosion at its main port of Beirut shattered its capital and destroyed grain silos there, part of which collapsed following a week-long fire just on Sunday.

As the Razoni moved towards the open waters of the Black Sea, it changed its destination from Istanbul to Tripoli, Lebanon.

The statement from the Turkish ministry said that other ships will also leave Ukrainian ports through security corridors in accordance with agreements signed in Istanbul on July 22, but did not provide further details.

Russia and Ukraine have signed separate agreements with Turkey and the UN paving the way for Ukraine – one of the world’s main breadbaskets — to export 22 million tons of cereals and other agricultural products blocked in the ports of the Black Sea because of the Russian invasion.

The agreements also allow Russia to export grain and fertilizers.

Ukraine’s infrastructure ministry said another 16 ships, all stranded since the start of the full-scale Russian invasion on Feb. 24, were awaiting their turn in Odessa ports.

“Unlocking ports will provide at least $1 billion in foreign exchange earnings to the economy and an opportunity for the agricultural sector to plan for next year,” Kubrakov said.

The United Nations welcomed the development, saying in a statement that Secretary-General Antonio Guterres hopes this will be just the first of many commercial vessels carrying Ukrainian grain overseas and “bring much-needed stability and relief to global food security, especially in the most fragile countries”. humanitarian contexts.

The resumption of grain shipments came as fighting raged elsewhere in Ukraine.

Ukraine’s presidential office said at least three civilians had been killed and 16 others injured by Russian shelling in the Donetsk region in the past 24 hours.

Donetsk Governor Pavlo Kyrylenko reiterated a strong call for all residents to evacuate. In particular, he insisted on the need to evacuate approximately 52,000 children still remaining in the region.

In Kharkiv, two people were injured by a Russian strike in the morning. One was injured while waiting for a bus at a stop, and another was injured when a Russian shell exploded near a building.

“The danger remains: the Odessa region has been constantly bombed and only regular supplies could prove the viability of the signed agreements,” said Volodymyr Sidenko, an expert at the Kyiv-based think tank Razumkov Center.

“The departure of the first ship does not solve the food crisis, it is just the first step which could also be the last if Russia decides to continue the attacks in the south.”