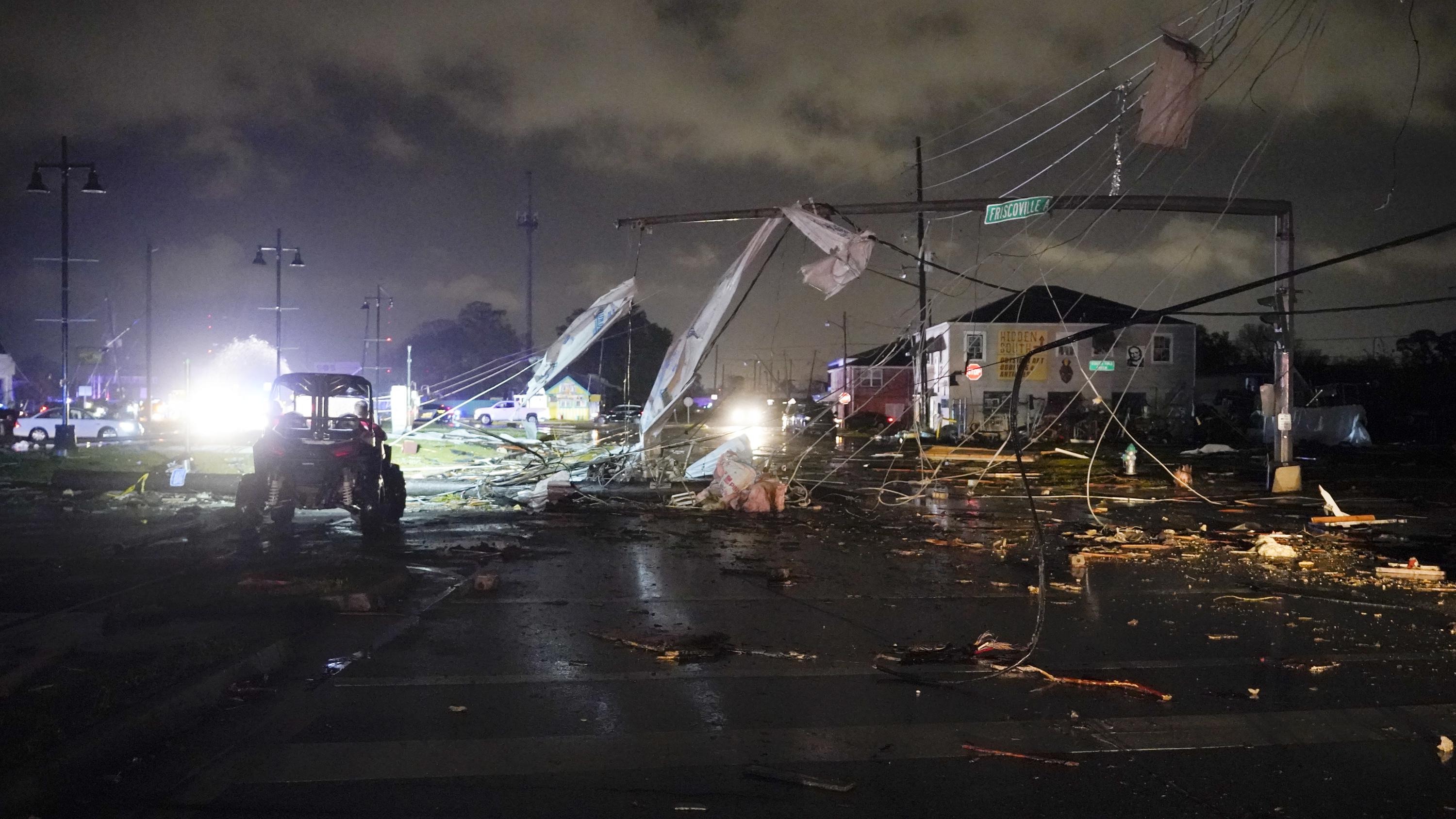 NEW ORLEANS (AP) — A tornado ripped through parts of New Orleans and its suburbs Tuesday night, downing power lines and scattering debris in a part of the city that had been heavily damaged by Hurricane Katrina he 17 years ago.

There were no immediate reports of injuries from the New Orleans tornado. Other tornadoes spawned by the same storm system struck parts of Texas and Oklahoma, killing one person and causing multiple injuries and extensive damage.

The tornado appeared to start in a suburb of New Orleans, then move east across the Mississippi River into New Orleans’ Lower 9th Ward and parts of St. Bernard Parish – all of which have two were badly damaged by Katrina – before moving northeast.

Guy McGinnis, president of St. Bernard Parish, told WWL-TV the parish suffered “widespread damage” in parts of the parish that border New Orleans to the east. Search and rescue teams were scouring homes for people and responding to at least two calls from people who said they were trapped in their homes in their bathrooms.

“At this time, no major injuries have been reported,” McGinnis said. “The night will be long.”

It was not immediately known if anyone had been injured. While the metropolitan area is often hit with inclement weather and heavy rain, it is rare for a tornado to cross the city.

High winds uprooted trees in Ridgeland, Mississippi, as a possible tornado passed through the Jackson-area town on Tuesday afternoon, but there were no immediate reports of injuries or serious damage to buildings. Mississippi State University campus police in Starkville shared a photo of a large leafy tree lying across a street.

Many schools were closing early or canceling after-school activities Tuesday in parts of Louisiana and Mississippi to allow students to get home before the weather deteriorates. Shelters were opened for residents who needed a place to stay as the storms rolled through.

Storms were expected to intensify throughout the day as temperatures rise, increasing the threat of tornadoes, hail and high winds. Forecasters predicted intense tornadoes and damaging winds, hurricane strength with speeds of 75 mph (120 km/h) or more, across much of Mississippi, southern and eastern Louisiana and of western Alabama. Baton Rouge, Louisiana, and Jackson, Mississippi, were among the cities at risk of bad weather.

The system dumped heavy rain, downed trees and triggered multiple tornado warnings as it moved through Alabama on Tuesday evening. The roofs of several homes were damaged in Toxey, Alabama, after a storm preceded by tornado warnings passed through the area, the National Weather Service tweeted.

Federal and state authorities in Louisiana have reminded thousands of hurricane survivors living in government-provided mobile homes and RV trailers to have an evacuation plan as the structures may not hold up to the expected weather conditions. More than 8,000 households live in these temporary accommodations, officials said.

In Texas, multiple tornadoes were reported Monday along the Interstate 35 corridor, including the Austin suburbs of Round Rock and Elgin, as well as North and East Texas and southern Texas. ‘Oklahoma.

In Elgin, broken trees lined rural roads and pieces of metal, uprooted by high winds, hung from branches. Residents exercised caution to avoid downed power lines as they worked to clean up the remains of shattered ceilings, demolished walls and damaged cars.

“There was a barn there,” Harkins said, pointing to an empty lot on his uncle’s property covered in scattered debris. He said the building was empty when the first tornado hit Monday and his family is grateful no one was injured.

“It was crystal clear, well defined,” Harkins said. “And then one went up and another went down.”

The tornadoes came on a day of wild weather in Texas – wildfires burned across the west and a blizzard warning was issued for the Texas Panhandle, where up to 9 inches (23 centimeters) of snow fell.

“There is absolutely nothing out of the ordinary between what we saw yesterday and what we see today,” said Victor Gensini, a professor of meteorology at Northern Illinois University who studies severe storms. This is the time of year when tornadoes and storms are to be expected and there are usually more for years with a La Nina, a natural cooling of parts of the Pacific that alters the weather around the world, did he declare.

Abbott said 10 people were injured by storms in the Crockett area, while more than a dozen were reported injured elsewhere.

The Grayson County Emergency Management Office said a 73-year-old woman was killed in the community of Sherwood Shores, about 95 miles north of Dallas, but offered no details.

Homes and businesses in at least a dozen Texas counties were damaged, according to reports from the Storm Prediction Center.

Authorities reported damage in Jacksboro, about 100 miles northwest of Fort Worth. Photographs posted to social media show a storm ripping the wall and roof off parts of Jacksboro High School, including its gym.