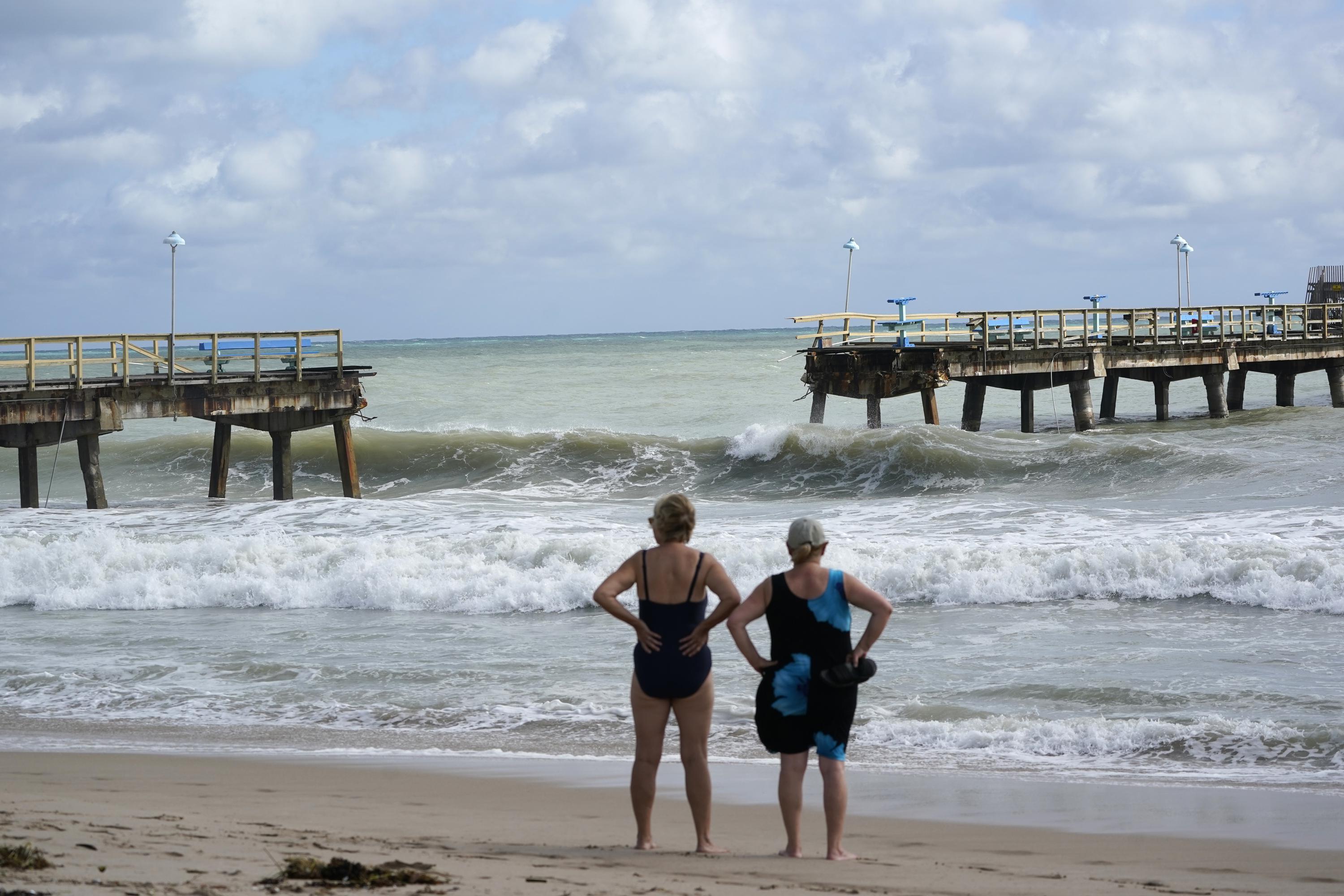 VERO BEACH, Fla. (AP) — Tropical Storm Nicole toppled several homes into the Atlantic Ocean on Thursday and threatened a row of high-rise condominiums in locations where Hurricane Ian washed away the dikes and other remaining protection only a few weeks ago.

“Several coastal homes in Wilbur-by-the-Sea have collapsed and several other properties are in imminent danger,” Volusia County Sheriff Mike Chitwood said in a social media post. In the Daytona Beach area, most bridges to the beach have been closed to all but essential personnel and a curfew has been put in effect, he said.

Wilbur-by-the-Sea is an unincorporated community on a barrier island with only beachfront homes. Next door in Daytona Beach Shores, a strip of high-rise condominiums were evacuated before landing of Nicole because their seawalls had collapsed and the beach had all but disappeared.

The Marbella Condominium Owners Association had just spent $240,000 to temporarily rebuild the seawall Ian destroyed in September, said Connie Hale Gellner, whose family owns a unit there. Live video from cameras in the building showed Nicole’s storm surge sweeping him away.

Nicole covered nearly the entire weather-weary state of Florida while reaching Georgia and the Carolinas before dawn Thursday. Tropical storm-force winds extended up to 450 miles (720 kilometers) from the center in some directions as Nicole turned north over central Florida.

Two people were killed by electrocution when they touched downed power lines in the Orlando area, the Orange County Sheriff’s Office said.

Early damage assessments showed how Nicole left several beachfront properties teetering above the water. The Volusia Sheriff’s Office released a photo of a home where erosion had undermined the ground all the way to its main ocean-facing wall. A roofed platform jutted out over the eroded slope supported by narrow beams.

Krista Dowling Goodrich, who manages 130 rental homes in Daytona Beach Shores as director of sales and marketing at Salty Dog Vacations, saw the waterfront disappear behind some properties as evacuations were underway just before the storm hit. She was trying to get to the scene on Thursday morning to see how they were doing.

“While we were there, the whole yard started to collapse into the ocean. It went all the way to the house,” she said. The water also compromised the remaining land between a row of tall condominiums nearby, she said.

“These were the tall skyscrapers. So people who didn’t want to leave, they were physically forcing them out because it wasn’t safe,” Goodrich said. “I’m worried about the infrastructure in the area at the moment because once the dykes are gone they won’t just let people in…there will be a lot of displaced people for a while.”

Authorities had warned that storm surge from Nicole could further erode many beaches. The rare November hurricane prompted authorities to close airports and theme parks and order evacuations.

Nicole made landfall as a Category 1 hurricane around 3 a.m. Thursday near Vero Beach but caused no significant damage there, officials said Thursday. Part of a fishing pier was washed away in Lauderdale-by-the-Sea. But the bulk of the storm hit north of its center. As of 10 a.m., Nicole’s maximum sustained winds had dropped to 85 km/h (50 mph), centered between Tampa and Orlando, moving west-northwest at nearly 26 km/h (16 mph ).

The storm left southern Florida sunny and calm as it moved up the peninsula, but could dump up to 6 inches of rain on the Blue Ridge Mountains by Friday, the hurricane center said. Flash and urban flooding will be possible as rain spreads across the eastern Ohio Valley, mid-Atlantic and New England through Saturday.

Nicole was the first hurricane to hit the Bahamas since Hurricane Dorian, a Category 5 storm that devastated the archipelago. in 2019. For Floridians tired of the stormit is only the third November hurricane to hit their shores since record keeping began in 1853.

Forty-five of Florida’s 67 counties were under a state of emergency. President Joe Biden also approved a declaration of emergency for the Seminole Tribe of Florida, ordering federal aid to the tribal nation. Many Seminoles live on six reservations across the state. The tribe also owns the Hard Rock Cafe franchise, with several of its hotels and casinos on Nicole’s way.

Gov. Ron DeSantis said at a Thursday news conference in Tallahassee that about 333,000 electric customers were without power by mid-morning, or about 2.9% of the state’s total. DeSantis said there are 17,000 powerline workers ready to begin restoring power and many other assets, including lifeboats and vehicles, will be deployed as needed.

“We are ready and have the resources to meet any post-storm needs that may arise,” the governor said.

Parts of Florida were devastated by Hurricane Ianwhich hit as a Category 4 storm. Ian destroyed homes and damaged cropsincluding orange groves, across the state – damage many are still dealing with – and sent a storm surge up to 13 feet (4 meters) ashore, causing widespread destruction.

See the latest AP coverage on our climate change and its impacts here: https://apnews.com/hub/climate-and-environment