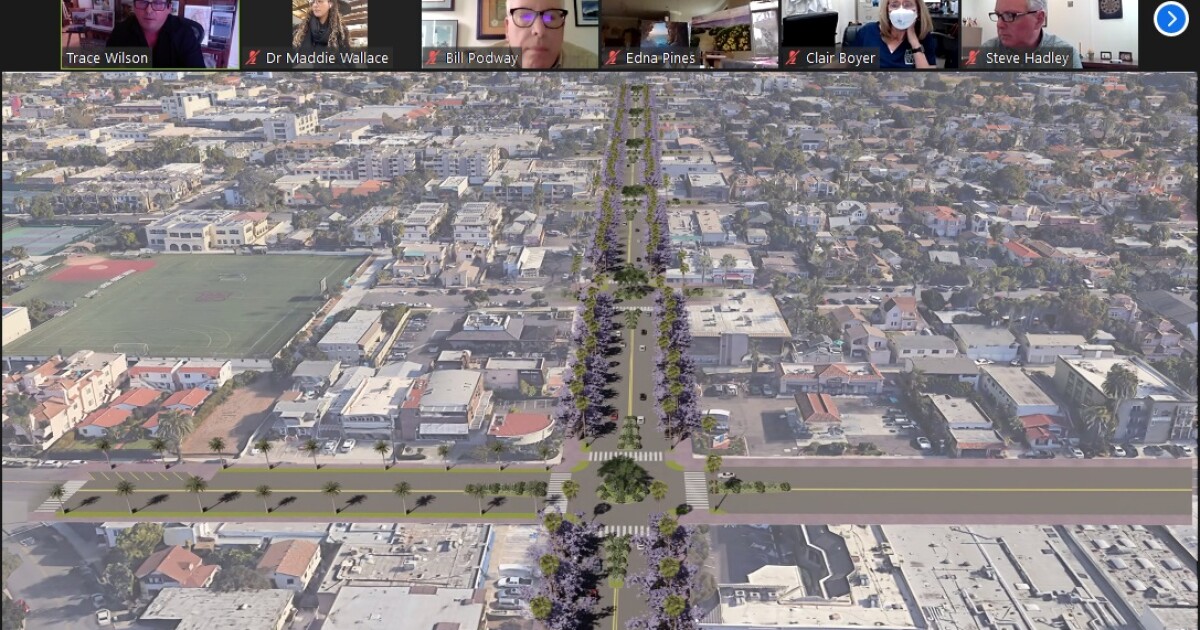 The Jolla Village Merchants Association was the first community group to endorse the Village Visioning Committee’s streetscape plan at the association’s March 9 meeting.

The proposal aims to provide a comprehensive master plan for the public right-of-way, street trees, traffic calming and more in the village and surrounding area.

Architect and La Jolla resident Trace Wilson, a member of the village’s vision committee, told council that the committee had been working on the plan for a year and a half and that the project “adds a lot of specificity to the ordinance of planned district”. [blueprint for development] and gives people a better guide on how we can develop the public right of way in the future. With a plan, we can find mechanisms to implement it.

The Village Visioning Committee is an ad hoc group of the La Jolla Community Planning Association made up of realtors, architects, engineers and others.

His plan is a “macro view of La Jolla,” Wilson said, “from property line to property line, from Turquoise Street to UCSD and Highway 5 to the coast.” It addresses what it sees as a neglect of public spaces, he said.

To create the plan, Wilson modeled all of La Jolla for a digital composition of its streets.

Reflecting how street trees in La Jolla have evolved over the years, Wilson said, “The first thing we decided to do was create an identity for each street,” looking at what might work for each. For example, taller, more pedestrian-oriented streets might have taller, more shade-oriented trees.

He said the plan also looks for potential changes to zoning regulations and where some taller buildings might be appropriate.

“La Jolla is really underdeveloped,” Wilson said. “We have a lot of one-story buildings and parking lots, and one of the things we miss is a better mix of housing to keep people in La Jolla to dine and shop and not drive” The Throat” [where La Jolla Parkway becomes Torrey Pines Road] everyday.”

Street updates would include changing parallel to diagonal parking spaces to allow for more parking and slow traffic. The plan also lists areas where roundabouts, bulbs and increased landscaping could be used.

“If we invest in our infrastructure, private developers are going to come in big and contribute to a much better La Jolla,” Wilson said.

LJVMA President Amber Anderson said the plan would be “a positive thing for La Jolla. …I appreciate all of your research and investment in this area.

LJVMA Vice President Morgan Barnes agreed: “I can’t imagine who wouldn’t want this to happen. … It seems incredible to me.

The board voted unanimously to support the plan. The village vision committee met with local politicians to try to gain support and explore funding options.

Wilson said the committee will likely feature a large public workshop to gather more input after community groups weigh in.

“La Jolla is really underdeveloped. We have a lot of single storey buildings and parking lots.

Part of the plan — to rework what’s called the La Jolla Cultural District — was presented at the Jan. 19 meeting of the La Jolla Traffic & Transportation Board.

The plan is different from the Enhance La Jolla streetscape plan which focuses on certain blocks at Girard Avenue and Prospect Street.

SDG&E awarded LJVMA $2,000 in exchange for promotional assistance from the association, such as allowing a table at events, posting articles to the LJVMA blog, and access to publishing on his Facebook group.

Rudick said she would also apply for a grant to pay for static directional signs throughout the village that would direct La Jolla visitors to landmarks such as the beach and the shopping district. At least one sign would be displayed at a local bus stop.

“I love that people come to the table with so many great ideas, but having another event scheduled at the same time as the Art Walk was not well received,” Longo said. “The galleries are putting a lot of time and energy into making this event wonderful and there are only three short hours left [4-7 p.m.] …so we need to be aware of what is being done during those hours.

She suggested that any future gigs be planned after the First Friday Art Walk or another day.

“Jazz on Prospect”, produced by and featuring singer-turned-luxury-home-selling-agent Anna Danes, is intended as a series of free monthly concerts that would typically coincide with the First Friday event, although the performance of the next month is scheduled for Thursday, April 21, the before the start of the La Jolla Concours d’Elegance motor show.

Next meeting: La Jolla Village Merchants Association next meets at 4 p.m. on Wednesday 13 April. The plan is to meet in person. Learn more about lajollabythesea.com. ◆

Russia’s wars in Chechnya offer grim warning of what could happen in Ukraine: NPR