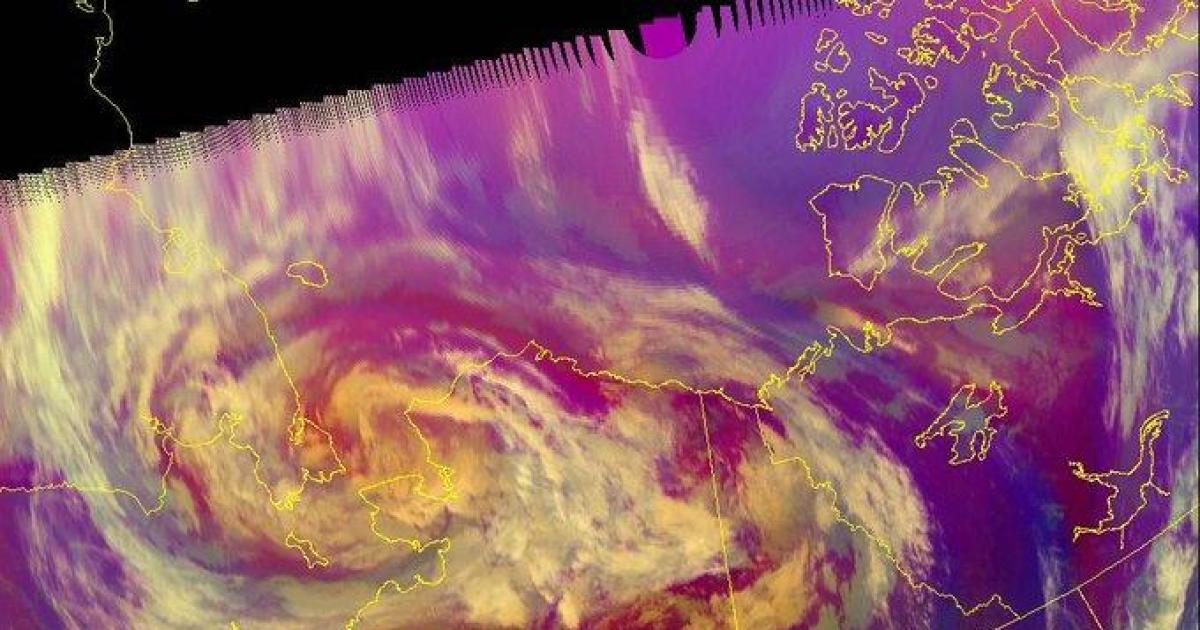 Floodwaters were receding in parts of western Alaska battered by the worst storm in half a century, leaving behind debris tossed by powerful Bering Sea waves onto beaches and seaside communities.

The storm, a remnant of Typhoon Merbok, weakened on Sunday as it moved north from the Bering Strait into the Chukchi Sea on Alaska’s northwest coast, where it still threatens small communities, said National Weather Service meteorologist Kaitlyn Lardeo.

“This guy is going to be hanging around the Chukchi Sea for the next few days and getting weaker fast because he’s so stationary,” she said.

Several communities reported houses being toppled from their foundations by the force of incoming water, often propelled by winds blowing at nearly 70 miles per hour. A house in Nome floated down a river until it was caught under a bridge.

It was a massive storm system – large enough to cover the continental United States from the Pacific Ocean to Nebraska and from Canada to Texas. This influenced weather systems as far away as California, where a rare late summer storm brought rain to the northern part of the state, offering some relief to wildfire crews, but also complicating fire suppression efforts due to mud and loose soil.

There have been no reports of injuries, deaths or missing persons in Alaska, the governor said at a news conference on Sunday. A child reported missing on Saturday was later found, he said. Officials had warned that some places could experience their worst flooding in 50 years and the high waters could take up to 14 hours to recede.

Dunleavy said Sunday roads were damaged and state officials were assessing potential damage to levees, water and sewer systems, airports and ports. It identified five communities – Hooper Bay, Scammon Bay, Golovin, Newtok and Nome – as being heavily impacted by a combination of flooding, flooding, erosion and electrical problems in towns or their airports.

Emergency management and American Red Cross personnel will be deployed to those communities beginning Monday, while members of the Alaska National Guard will be dispatched to Nome, Bethel and Hooper Bay to assist residents. Lower 48 Red Cross volunteers will also carry out food, water and shelter needs assessments in other flooded villages.

Many homes were flooded and about 450 West Coast residents sought refuge in shelters, more than half of them at a school in Hooper Bay, where they ate processed moose donated by village residents. Others weathered the storm on higher ground outside their communities.

Representatives of the Federal Emergency Management Agency were already in Alaska before the storm.

Among the hardest-hit communities is Golovin, a village of about 170 residents who have mostly sought shelter in a school or three hillside buildings. Winds in the village gusted to over 60mph and the water rose 11ft above the normal high tide line and is expected to rise another 2ft on Saturday before peaking.

“Most of the lower part of the community is completely awash with flooded structures and buildings,” said Ed Plumb, a meteorologist with the National Weather Service in Fairbanks.

Clarabelle Lewis, tribal government facility manager, Chinik Eskimo Community, was among those who sought refuge on the hill overlooking Golovin. She and others were weathering the storm in the tribal office after securing items in their homes from high winds and helping neighbors do the same.

“The winds were howling, it was loud,” she said.

Paul Kosto, chief of the Unified Command logistics section in Nome, Alaska, told CBS affiliate KEYS in Anchorage that the city is reporting road damage, flooding and homes being moved from their foundations and are afloat.

“We have a house in the Snake River that’s floating upstream, if you can believe it, because the winds are pretty strong and pushed it over a bridge,” Kosto said.

Kosto said that for the past 14 to 18 hours they have experienced high winds of over 70 mph.

“We’ve definitely seen hurricane-force winds over the past day,” Kosto said. Nome also has lots of rain and high waves on the coastline.

Tidal wave heights were reached in Nome early Saturday evening, so the focus of high water is moving north toward the north side of the Seward Peninsula and along the state’s northwest coast. from Kotzebue to Point Hope and up to Wainwright during the first part of Sunday. , according to KYES.

Most communities experienced wind gusts ranging from 41 mph to 67 mph, but Cape Romanzof had peak winds of 91 mph, the weather service said.

Lewis has never experienced such a storm in 20 years at Golovin.

“We’ve had flooding in the past, but it’s never been this bad,” she said. “We have never had houses moved from their foundations.”

Flooding was also reported in Hooper Bay, St. Michael’s, Unalakleet and Shaktoolik, where waves crashed over the berm in front of the community, Plumb said.

In Hooper Bay, more than 250 people took shelter inside the school, public radio station Bethel KYUK reported. The village is one of the largest on the coast with almost 1,400 inhabitants.

The school’s deputy principal, Brittany Taraba, said three houses were knocked down and large parts of the village were flooded.

Residents support each other, including donating recently captured and processed moose to feed those sheltering at the school.

Plumb said the storm would cross the Bering Strait on Saturday and then track into the Chukchi Sea.

“And then it’s going to kind of park up and get weak just west of Point Hope,” he said of the community on Alaska’s northwest coast.

He said there would be high water near the northern Bering Sea until Saturday evening before levels began to drop until Sunday. Rising water levels further north in the Chukchi Sea and Kotzebue Strait regions were expected through Sunday.

An earthquake, meanwhile, shook Fairbanks, Alaska’s largest city, at 5:16 p.m. local time Sunday, according to the US Geological Survey.